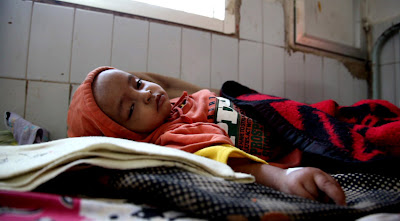 Whilst natural disasters, such as the Japanese tsunami or nuclear disasters such as Chernobyl, capture the imagination of the media and public alike, other less high profile cases have failed to attract such publicity. In an effort to change that, documentary maker Van Maximilian Carlson has attempted to shine a light on one such disaster in his film Bhopali.

In 1984, the American-owned Union Carbide factory in Bhopal, India suffered a huge catastrophe. After a series of cost-cutting exercises and a number of safety oversights, an enormous gas tank exploded. Forty tonnes of toxic material was launched into the night sky and as the population slumbered they were asphyxiated.

In the aftermath, water supplies were contaminated with a cocktail of lethal chemicals – including cyanide. As well as causing further deaths at the time, these poisons have caused future deaths and medical conditions, including cerebral palsy, in the generations of children born in the years since.

On the 25th anniversary of the disaster, Bhopali examines the ongoing fight for justice for the 25,000 who died by exploring the lives of those affected and the struggle for legal justice…

Bhopali is a sumptuous film to look at. Director Carlson seems to have made a deliberate decision to avoid the traditional ‘talking heads’ interview, which commonly populate documentaries. It’s a decision which has paid off handsomely. Interview subjects are often framed unconventionally, and each shot is usually filled with at least one slash of lush colour – a verdant green lawn or a richly coloured sari. Given the often grave nature of the subject matter, it’s quite a juxtaposition – but one that really works.

Indeed, the film is full of juxtaposition. The most heartbreaking scenes see Saiba Babu, a tiny child afflicted with an undiagnosed illnesses caused by the polluted water supply. She’s absolutely beautiful – huge brown eyes and the cutest mouth – but she’s been rendered speechless and almost incapable of movement. That she’s so damaged inside is hard to fathom when viewed from the outside – and it makes her plight all the more appalling.

The contrast between rich and poor is also apparent. Whilst Union Carbide refuses to accept responsibility, the people affected campaign for justice. It’s a classic David and Goliath tale, but this time Goliath is swaddled in layers of protection from toothless international laws. David can hardly get a shot at his opponent. As the multinational company Dow buy out Union Carbide, the people of Bhopal see their campaign undermined by Indian politicians who refuse to acknowledge that the area is polluted at all.

Perhaps, here, the documentary is slightly less powerful. Whenever Carlson moves away from the personal tragedy of the situation, he is danger of politicking. This is a minor criticism, however. The filmmaker has assembled some truly impressive commentators – including Noam Chomsky – and manages to steer a path through the complicated maze of denials and outright lies without ever losing sight of the human story.

That story is best exemplified by Sanjay Verma – a victim of the gas who lost both parents and five siblings in the immediate aftermath. He’s an optimistic and positive presence, despite the awful loss he has suffered – his activism is truly inspirational, and his account of the night of the explosion is extremely moving.

As the film moves towards its conclusion, it becomes clear that a resolution is still some way off. Union Carbide’s pesticide factory still stands – a skeletal hulk still filled with dangerous chemicals – and children play in its grounds. It’s distressing to see something so harmful is still so close to those it continues to damage – yet the people have nowhere else to go and nowhere else to obtain the water they need to survive. It’s an ugly reminder which scars the landscape – as well as the people.

Perhaps the most distressing part of the film deals with the unborn children of those affected by the explosion. A horrifically poignant scene sees the camera pan along a shelf of foetuses: the unborn or stillborn babies of poisoned pregnant mothers. Initially, they’re otherworldly and intriguing – until the realisation of what you’re looking at dawns on you. It’s a very short scene which packs a huge punch. Although the final scene (produced by Dow themselves) is still more shocking.

It’s also worth mentioning how refreshing it is to see a documentary which makes such intelligent use of subtitling. There’s been a recent trend in cinema (and particularly television) to subtitle any kind of regional or foreign accent. Here, the decision has been made to subtitle only the heaviest of accents – leaving the audience to listen to the words being spoken. It’s a small thing which makes a big difference.

Bhopali is a fantastic documentary about an appalling episode in India’s history. It looks thoroughly cinematic, and the human stories which are woven throughout the narrative ensure that it remains interesting and engaging throughout. More important than its artistic virtue, it sheds light on a little-known tragedy which has affected thousands and thousands of people – and the efforts taken to avoid accepting responsibility for it. Vital stuff.
Posted by The Author at 09:19