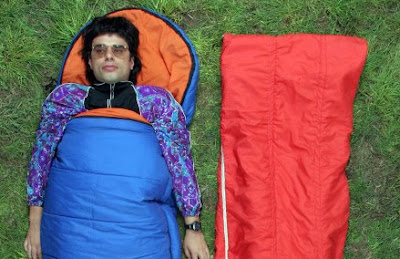 Since Flight Of The Conchords played their final notes at the end of their second series, fans of New Zealand’s number one comedy folk album have been desperate for more. Sadly, the only attempt at reuniting the cast was the risible Diagnosis: Death – a film which really ought to have been euthanized on the operating table. Quietly, though, Jemaine Clement has been forging a career for himself with voiceovers and character parts in some big Hollywood releases. Arguably his greatest success, however, might just be Eagle Vs Shark.

The eagle of the title is Jarrod, a socially inept loser wasting his life away in a dead-end job. The shark is Lily, stuck in a burger-flipping McJob. When they finally get together at an animal-themed fancy-dress party (hence the film’s title), they embark on a touchingly awkward relationship which begins with him thrashing her on a dreadful video game.

As things become more serious, the couple visit Jarrod’s dysfunctional relatives. Here, Lily is left to bond with Jarrod’s oddball family whilst their relationship begins to unravel – thanks largely to Jarrod’s obsessive training regime ahead of a violent showdown with Eric, a school bully against whom he’s long harboured a grudge…

Opening with the thoroughly geeky Lily (Loren Horsley) practising her chat-up lines in front of the bathroom mirror, it’s immediately apparent that Eagle Vs Shark shares common ground with films like Napoleon Dynamite – the downtrodden and awkward are presented as heroes, and their differences celebrated and explored rather than mocked.

Like Napoleon Dynamite, Taika Waititi’s movie places its protagonists in dull suburbia, allowing the characters and their situations to shine through. Lily’s desperately dull life is perfectly captured during a touching sequence early in the film: stuck behind the counter of her job in a fast-food restaurant, she watches with sad eyes as colleagues flirt and laugh together, biding her time until the object of her affections approaches to place his order. He ignores her, choosing to join a busier queue instead.

He is, of course, Jarrod (Jemaine Clement). He’s an unusual looking guy: oversized features hidden behind tinted glasses and topped with a horrendous mullet. And he’s just as socially inept as Lily. Thankfully, he does eventually use Lily’s till at the takeaway, resulting in a perfectly pitched conversation about the benefits of free cheese, which sets the tone for the rest of their romance.

There are no ‘jokes’ in Eagle Vs Shark. Instead, the humour is derived largely from the surreal situations in which the characters find themselves. Jarrod hosts a cringe worthy party for his dorky friends, featuring some truly woeful fancy dress outfits, a man having shoes thrown at his head and a naff video game tournament. It’s absurd but just manages to remain believable, thus pulling the audience into Jarrod’s strangely off-kilter world. The video game itself (Fightman) is hilariously awful, using live actors to create a Mortal Kombat style fighting game which will resonate with anyone familiar with old-school gaming.

Key to the whole film is Loren Horsley’s performance as Lily. As the romance grows between her and Jarrod, Horsley manages to perfectly convey Lily’s burgeoning confidence. She moves from a shuffling, lip-biting wreck to a far more collected and assertive individual in a wholly convincing way. It’s a brilliant performance, and it should come as no surprise that it was Horsley and Waititi who initially developed the story – she obviously has a very clear idea of where she wanted to take the character.

Jarrod’s development is less marked- he rarely shows himself to be anything other than an immature idiot with aspirations well above his station. He’s misguided, utterly insensitive but rarely malicious – something Clement manages to portray very effectively. There’s a pretty big crossover between his performance here and in Flight Of The Conchords, which is perhaps indicates a limited range – it will be interesting to see what else he can do as an actor.

Whilst Napoleon Dynamite comparisons are easy to draw, Wes Anderson also appears to be a key influence. The melancholy lo-fi soundtrack (by Phoenix Foundation) could have been lifted straight from one of Anderson’s movies, and the whimsical animations which occur throughout are reminiscent of The Life Aquatic’s animated fish or The Royal Tenenbaum’s Dalmatian mice.

Perhaps Eagle Vs Shark’s greatest strength is that its heart is so firmly in the right place. Although the cast of characters are dysfunctional misfits, they are presented favourably and sympathetically. There’s no rush to reinvent the characters, airbrush them or transform them; instead the audience is placed among them and asked to accept and understand them the way they are – a welcome change from the ‘geek turned good’ cliché seen in so many Hollywood movies.

For anyone tired of rom coms featuring the likes of Jennifer Aniston, Eagle Vs Shark is the ideal antidote. It’s unashamedly romantic – but realistically so. The smooth comes with huge slices of rough, the male lead is often obnoxious and unlikeable and the storyline is unambitious. It’s a far more accurate portrayal of love and relationships than you might expect, shot through with plenty of laughs and featuring a truly remarkable and utterly charming performance from the excellent Lauren Horsley.
Posted by The Author at 09:32