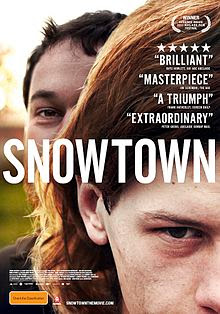 In 1999, John Justin Bunting was sentenced to eleven consecutive life sentences for his part in the murder of eleven people in and around Adelaide. Acting as ringleader to a vigilante group, Bunting preyed on those he believed to be guilty of paedophilia or homosexuality. Widely considered to be Australia’s worst serial killer, Justin Kurzel’s controversial film, Snowtown, tells his tale.

Set largely in and around Vlassikis’ family, director Kurzel focuses tightly on the dysfunctional and predatory characters that surround their home. Vulnerable mother Elizabeth allows a succession of men to play a role in bringing up her four sons as she struggles to cope. When her three youngest boys are sexually abused, the charismatic Bunting enters her life as a seemingly protective presence. His intentions, however, soon become altogether more sinister.

The movie takes the viewpoint of Jamie Vlassikis, a teenage boy to whom Bunting becomes a surrogate father. After moving in with the family, Bunting gradually manipulates and grooms his young charge into becoming an active participant in his killing spree. The extent of his involvement is documented in detail as it snowballs, running out of control as their murderous rampage becomes increasingly bloody…

Snowtown is a film to be endured rather than enjoyed. The list of taboo or controversial topics graphically covered includes child abuse, male rape, animal mutilation and gruesomely depicted torture and violence. It’s a harrowing, bleak and unsettling experience. Hand-held cameras place the audience directly inside the action – it’s instantly claustrophobic and sometimes too real. As characters eat, their food remains stuck on straggly beards, snot and saliva run down faces, and the dialogue is naturalistic enough to suggest that much of it was improvised. It’s thoroughly uncomfortable – not least in scenes around the kitchen table in which characters gather to discuss the action they ought to take against local paedophiles.

These scenes are genuinely scary. It’s impossible to say whether Snowtown really suffered disproportionately from child sex abuse, but the thought that such discussions occurred regardless is worrying. Led by Bunting (Daniel Henshall), the participants are encouraged and riled into spiteful and disgraceful accusations and threats which reflect as badly on them as those they accuse. Bunting’s prompting and probing ought to have given clues as to his criminal intentions, but it’s testament to his controlling personality and charm that he manages to remain an inspirational character rather than an intimidating one.

It’s an amazing performance from Henshall. His transformation from affable and protective to murderous (and hypocritically perverse) is totally believable. His face is almost cherubic, at times, although behind his smiling eyes lurks obvious malice. And when the mask slips in occasional flashes of violence and temper, the menace he displays is truly frightening.

Scenes of actual violence usually occur off screen. Two notable exceptions are Jamie’s (Lukas Pittaway) rape at the hands of his older brother, and a prolonged scene of physical torture. The former is difficult to watch: it comes from nowhere and is shot and played in a brutally matter-of-fact way. The latter is even more gruelling. Taking place in a bathtub, the scene sees one of the gang’s victims bound, beaten and bloodied in the most horrific and cruel fashion. Close-ups of fingernails being torn from digits are excruciating enough, but the drawn out death throes of the tortured victim are emotionally exhausting. Whether it was strictly necessary to show such a prolonged episode of suffering is debatable – it’s a powerful scene, but Snowtown might have been an even more powerful production if it had been brave enough stay focused on personalities rather than the details of the crimes they committed.

Jamie’s journey, for example, is entirely believable. After suffering all kinds of abuse and hardship, it’s easy to see how and why he’s so easily seduced by Bunting. To see a vulnerable youngster manipulated by an older man with dangerous ideas and morals is a well-trodden path – thankfully, Kurzel manages to steer a path through the potential clichés. His drift into criminality occurs in such small increments initially that it’s easy to understand. And as his involvement deepens so does the pressure placed upon him by Bunting. Pittaway’s understated performance is admirable – his resemblance to Heath Ledger is more than just physical.

Sadly, despite some great period touches (not least plenty of Sega Megadrives and shell-suits), the attempts to give context and detail to Snowtown go a little too far. There are a few too many scenes with little happening, and a couple which are little more than a revisiting of scenes already shown. A twenty minute reduction of the two hour running time would have been perfectly possible, and would’ve made for a tighter movie.

Snowtown is an admirable and brave piece of filmmaking which tackles its difficult and troubling subject matter head on. But it’s also extremely gruelling and, at times, is very difficult to watch. It’s a film which will divide audiences and will continue to cause controversy. View with caution.
Posted by The Author at 10:44