Dreams Of A Life 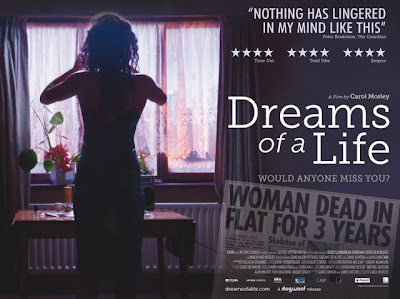 In a world of social media, mobile phones and private lives made public, it’s difficult to imagine someone disappearing unnoticed. But as recently as 2003, this is exactly what happened to Joyce Vincent, a woman whose dead body was found slumped on her sofa in front of the television – a position she’d remained in for over three years. Somehow, her death had escaped the notice of friends, family and the authorities until the grim day that Haringey Council officials broke down her door to investigate her rent arrears.

Having remained undiscovered for so long, it was impossible to determine the cause of Vincent’s death. It seems likely that she died of natural causes, but having spent time in a woman’s refuge it’s impossible to rule out foul play or suicide. Whatever the cause of her death, what is more troubling is that her demise raised no alarms. In Dreams of a Life, film-maker Carol Morley attempts to reconstruct Vincent’s life from the fragments of evidence which remain.

Taking a very traditional documentary form (talking heads, reconstructions and photographs), Morley weaves together an intriguing, dreamlike film. Her strength is in capturing the bewilderment of her subjects: those who knew Vincent are filmed at the points when they learned of their former friend’s tragic fate. Their emotions are impossible to conceal: disbelief and torment writ large across their faces. It’s a very effective method, ensuring their reactions and genuine and unrehearsed.

Former lovers, friends and colleagues are captured on camera, inter-cut with wordless re-enactments of scenes from Vincent’s life. They’re dreamy and wistful, with Zawe Ashton a striking presence in her role as Vincent. Watching the film in 2012, it’s impossible to comprehend that such a bright and vibrant young woman could simply have disappeared from public life. But her rootless and flighty nature, coupled with an abusive past conspired to create a character deeply flawed beneath her beautiful exterior.

There are no villains in this story, just hints at figures who carelessly used Vincent, a society which failed to care and a welfare state which overlooked her. It’s a deeply moving and thought provoking film which poses far more questions than can ever hope to be answer. In our busy, virtual lives it’s easy to forget how important genuine human contact is. Dreams of a Life reminds us.
Posted by The Author at 09:12