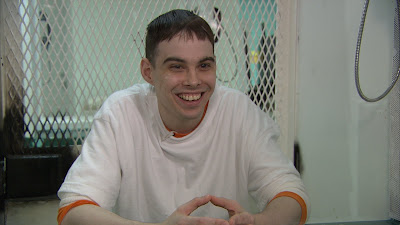 In 2001, Texan teenagers Michael Parry and Jason Burkett tricked their way into the homes of middle-aged housewife Sandra Stotler as she baked cookies. Desperate for the keys to her sporty red Camaro, they shot her dead. That evening, in order to drive away their spoils, they also killed her son and his friend so they could steal the clicker which would unlock access to the gated community in which they lived. Later Parry and Burkett disposed of the bodies in nearby woods and lakes before their eventual arrest in a shoot-out with police. Tried separately, Parry was sentenced to death whilst his partner in crime, Burkett, was given a life sentence.

Herzog states from the start that he is fundamentally opposed to capital punishment. He also ensures it’s made clear that he doesn’t have any affection for the subjects of his film. Beyond that, he lets the culprits, their friends and families tell this bizarre and contradictory tale. Werzog’s soothing, lyrical voice allows him to ask difficult questions without seeming abrupt or blunt, and his speed of thought and experience in making this kind of documentary truly shines: who else could elicit such tearful reaction with the question, “Tell us about an encounter with a squirrel?”

It’s patronising to refer to those involved as ‘rednecks’, but this is the label most easily applied to those involved. Homelessness, illiteracy, drink and drugs all play their part in the unravelling story of a triple homicide in which both of the convicted killers claim their innocence whilst blaming the other. Bizarre twists on a tale you might otherwise have heard before include the artificial insemination of a defence lawyer with smuggled semen and a tree growing through the floor of the car which sparked the killing spree.

That’s not to say that Into The Abyss isn’t a serious film. Its purpose is to shine a light on a horrific episode and its aftermath – and to leave the audience to decide how it feels about it. Both killers are allowed to put their cases to camera and Werzog deliberately refuses to influence the viewers’ interpretation of events. Perhaps the film’s most telling contribution, however, comes from Fred Allen. He’s the former captain of Huntsville prison’s death row and presided over 120 executions. His thought-provoking assertion that you should live for ‘the dash’ (the line on your gravestone between the dates of your birth and death) is a poignant reminder of the fleeting nature of human life.