Juan of the Dead 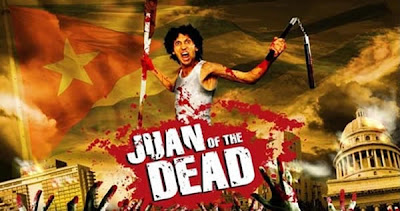 Vampires are so passé. Despite Twilight’s best efforts, it appears that the bloodsuckers look set to be usurped by their undead cousins, the zombies. With numerous zombie movies in the pipeline and Andrew Lincoln battling his way through The Walking Dead, the genre has rarely been in better shape.Even the Cubans are getting in on the act…
Juan of the Dead is the first zombie flick to come out of Cuba, and like many of stalwart George Romero’s pictures it has political comments to make in amongst the gore. With director Alejandro Brugués on hand to explain the movie’s social commentary, a packed Hyde Park Picture House settled in to enjoy his production.
Opening with the eponymous hero (Alexis Díaz de Villegas) and his friend Lazaro (Jorge Molina) afloat on a homemade raft, the two accidentally harpoon a floating zombie. Quite how he came to be there is never made clear – Brugués makes no attempt to explain the presence of the undead. Instead, the film focuses on how Juan and his motley crew of friends and family can both survive the outbreak and turn it into a profit making enterprise.
Initially, it seems that Juan of the Dead will be nothing but knockabout fun. The hangdog hero and his gang of friends are crudely drawn but entertaining and there are some snappy gags. One inspired set-piece featuring a zombie anchored to his dead wife with another stray harpoon is original and clever, but such ideas quickly run out. Instead, there are some slightly seedy scenes involving large breasts, wet t-shirts and masturbation, some standard ass-kicking montages and a contrived and predictable family sub-plot.
Perhaps something has been lost in the cultural crossover, but at times Juan of the Dead felt a little misogynistic. Bad subtitling also meant that some of the gags fell slightly flat. That said, the plot races along, the gore factor is impressive and there are genuine laugh-out-loud moments. Brugués has made a brave film given the obvious (and occasionally clumsy) political references to his homeland, but for a British audience his film is more miss than hit.