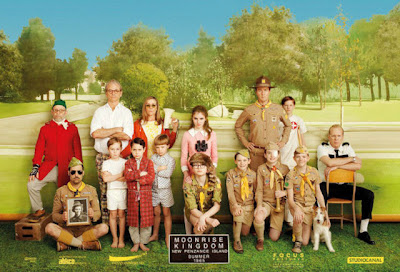 Wes Anderson has developed a style entirely of his own. It’s difficult to describe exactly, but includes all of the following: a sense of tragedy; large ensembles of familiar faces like Bill Murray and Jason Schwartzman; smart dialogue; girls with kohl-smoked eyes; deliberate colour schemes and idiosyncratic animals. Usually they focus on dysfunctional or eccentric characters or families. Melancholic soundtracks are always a feature.

Moonrise Kingdom is no exception. The cast features Ed Norton, Harvey Keitel and Bruce Willis, each frame is saturated in a golden yellow glow, the script crackles along at a fair old lick, and the choice of music mirrors the narrative. This time, though, two dysfunctional families dominate: orphaned Sam Shakusky’s (Jared Gilman) dreadful foster carers and Suzy Bishop’s (Kara Hayward) bickering parents (a splendidly curmudgeonly Murray and Frances McDormand).

He’s a Khaki Scout camping on the island of New Penzance with his troop. They’re a finely tuned unit, schooled by anal scout leader Randy Ward (Ed Norton), but they’ve taken against young Sam – leading to his absconding in a Shawshank inspired feat of escapology. She is a desperately lonely child who seeks solace from her parents’ travails in the pages of books. Prone to outbursts of extreme anger, she is painfully aware that her folks are struggling to cope with her behaviour. There’s more than a touch of The Royal Tenenbaum’s Margot and Eli about them – especially when they bond through an amateur performance of Noah’s Flood.

Together, they elope into the countryside sparking a manhunt which employs a collection of evil boy scouts, a world weary policeman and Tilda Swinton as the personification of Social Services. It’s a whimsical journey full of wonderful visual gags, whimsical turns of events and touching romance. Sam and Suzy’s relationship is the beating heart of the movie and Anderson’s camera absolutely loves the young couple. The search for the runways tears apart and then reunites the community, with each of the actors in question giving fantastically understated performances as the narrative hurtles to its stormy conclusion.

Like the whole of Anderson’s oeuvre, this film is not likely to appeal to everyone. But if you enjoyed his previous output (or Richard Oyaode’s Submarine) you’ll love this mannered, glowing tribute to young love.