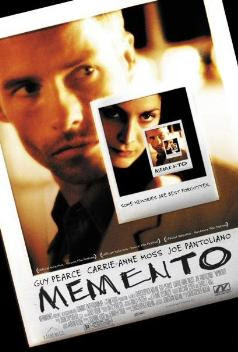 Sometimes it’s hard to believe that Christopher Nolan is British. Although his blockbuster successes are perhaps more cerebral than most, big-budget action flicks like Inception and The Dark Knight are pure Hollywood. Memento, only his second movie as director, is a more intimate and claustrophobic affair – although it does provide early evidence of Nolan’s desire to play with convention and experiment with the cinematic form.

The story is told through the eyes of Leonard Shelby (Guy Pearce), a man suffering from a rare form of amnesia: he is unable to form new memories. In an attack which saw his wife raped and murdered, Shelby was smacked around the head – meaning that although he can recall his life up to that point, he can no longer remember anything for more than a few minutes.

Desperate to uncover the identity of his wife’s killer, Leonard sets out on a painfully slow investigation: in order not to forget the clues he uncovers he is forced to make notes, annotate Polaroid photographs and tattoo words and numbers into his own torso. He is also beholden to others: an underhand motel owner; slimy Teddy (Joe Pantoliano) and barmaid Natalie (Carrie-Ann Moss). None of them, it seems, are quite what they claim to be, and each appears to have their own motive for helping (or perhaps hindering) Leonard’s investigation.

The story is, essentially, told backwards and ends with the beginning, thus mirroring Leonard’s quest for truth. Rapid fire editing, unresolved mysteries and questions to which neither Leonard nor the audience know the answers abound: Nolan has created a truly intriguing and mysterious world. It’s a film which requires a high level of concentration and intelligence from the audience: something one of my university friends seemed incapable of…

Back in the days of videotape, he borrowed the campus editing suite (usually late at night when it wasn’t being used for genuinely academic purposes) and painstakingly sliced and repositioned his video into chronological order. He was less than happy when the completion of his masterpiece was almost immediately followed by Memento’s DVD release: which allowed viewers to watch the film chronologically at the touch of a button.

Running parallel to Leonard’s murder investigation is the sad tale of Sammy Jankis (Stephen Tobolowsky), whose name is tattooed onto Leonard’s hand. In his former life as an insurance investigator, Leonard was ordered to prove whether or not Sammy’s memory loss – caused by a workplace accident – was physical, psychological or just an act. It’s a beautifully constructed storyline which adds huge depth to proceedings, forcing Leonard to confront his cynicism and question his own state of mind.

As you would expect, Nolan’s direction and editing are superb: the gritty visuals and ingenious editing contribute hugely to the film’s success. The acting is uniformly excellent too: Pearce is intensely watchable and Moss superb – but it’s Pantoliano who steals the show as the duplicitous, toady Teddy.