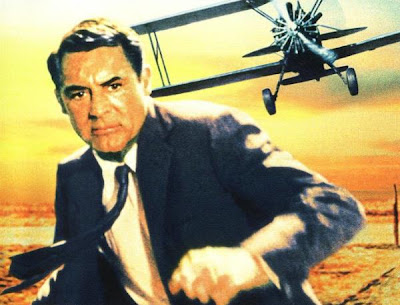 Alfred Hitchcock is arguably the greatest director of all time and features more than any other in the IMDB Top 50. His four entries (Vertigo, North By Northwest, Psycho and Rear Window) are amongst the most highly regarded films ever made. Although Rear Window is my undoubted favourite (thanks largely to my enduring man-love for Jimmy Stewart), North By Northwest is considered by many to be his most tightly plotted and accomplished masterpiece.

Sadly, it’s not a view I share. At times the contrivances and plot-holes are almost inconceivable in a tale of mistaken identity characterised by a baffling laid-back performance from Cary Grant. He plays Roger Thornhill, a Madison Avenue ad-man who is mistaken for international spy George Kaplin in the movie’s opening moments. From there, his life is turned upside as he is kidnapped, almost killed and framed for murder – although he still finds time to seduce a beautiful blonde on an overnight train. It is, of course, all part of a shadowy conspiracy which only Thornhill can unravel – provided he’s not murdered or arrested first.

Grant is preposterously laid-back in the lead role, barely ruffling a hair on his suavely coiffed head as he quickly adapts to the most outrageous circumstances. Roger Moore’s James Bond certainly owes a debt of gratitude to Grant’s performance here as he quips and seduces his way out of the most dangerous situations. He’s a likeable presence, of course, but Grant’s easy manner prevents the audience ever feeling that Thornhill is in genuine peril.

A number of memorable set-pieces are superbly executed, not least the iconic scene of Thornhill being attacked from above by a swooping aeroplane. Taking refuge wherever he can, the scene concludes with a huge fireball – all shot in glorious Technicolor and with no CGI. It’s impressive stuff indeed, but my preference is for Hitchcock’s smaller scale movies: a chance meeting on public transport becomes Strangers On A Train; something that might have been seen from an apartment building becomes Rear Window; a creepy man with mother issues becomes Psycho.