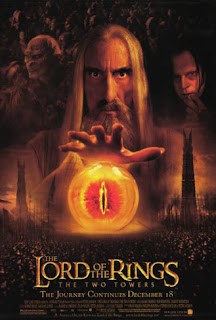 The Lord of the Rings is a sprawling fantasy series by author JRR Tolkien which is as much a part of England’s folklore as Glastonbury and Stonehenge. Despite being set in the fictional world of Middle Earth, the books are a model of twee Englishness which have been invoked and referred to in literature, film and music ever since their original publication. But until New Zealander Peter Jackson began filming on The Fellowship of the Ring, nobody had ever attempted to bring a live action version to the silver screen.

For the uninitiated, Tolkien’s tale tells of a powerful ring, forged in the fires of Mount Doom. Into this molten ring, the dark lord Sauron poured all of Middle Earth’s evil, only to lose the ring to an inquisitive hobbit – Bilbo Baggins. Bilbo, unaware of the ring’s capacity for destruction, returns home with it to the peaceful Shire, acting as guardian to it for decades until his old friend, the wizard Gandalf, arrives to announce that the forces of evil are stirring and the ring must be destroyed lest it falls into their hands – by throwing it back into the fire from whence it came.

And thus begins an epic quest to transport the One Ring back to Sauron’s kingdom where it can be cast back into the bubbling cauldron of Mount Doom. That journey is undertaken by a disparate group of characters consisting of four hobbits (tiny, hairy-footed people with voracious appetites), a grumbling dwarf, an ethereal elf and two earthy humans. Along the way they meet talking trees, orcs, olyphants and a hideously transformed creature named Gollum. Will they succeed in their mission, or will Sauron and his evil army triumph?

Sadly, but not unexpectedly, the three Lord of the Rings films do not appear chronologically in the IMDB Top 50. As a result, the first review to appear here is that of the second film in the series: The Two Towers. The Fellowship of the Ring and The Return of the King will follow as the countdown continues – if you’d like to read the reviews in order, please be patient!

There’s little exposition at the start of The Two Towers – just a brief recap of Gandalf’s (Sir Ian Mckellen) tumultuous battle with the balrog. This lack of concession to those who missed the first movie is an indicator of Peter Jackson’s attitude: his films are an all encompassing journey which require the audience to accompany him on the full journey.

Only now, there are three separate journeys to follow: Frodo (Elijah Wood) and his loyal friend Sam (Sean Astin) team up with the wastrel Gollum (a motion-captured Andy Serkis) on their mission to Mount Doom; the heroic Aragorn (Viggo Mortensen) leads dwarf Gimli (John Rhys Davies) and elf Legolas (Orlando Bloom) into the defence of embattled and embittered King Theoden (Bernard Hill) and Merry (Dominic Monaghan) and Pippin (Billy Boyd) encounter the bizarre talking ents – walking, talking trees with a grudge against Sauron and his armies of darkness.

This splitting of the narrative adds great variety and pace to proceedings as each set of characters sets about achieving their very different aims, but it’s safe to say that some of the stories are more interesting than others. The most engaging journey is that of Aragorn, Gimli and Legolas. Their epic battles on behalf of King Theoden are excellent – full of tension, drama and excitement. At the opposite end of the scale are Merry, Pippin and the ents – a deliberately sedate and considered part of the story which is, frankly, quite dull until the amazing revelation which makes their journey into the ancient forest worthwhile.

Most intriguing of all is Frodo, Sam and Gollum’s arduous journey to Mount Doom. As the ring takes a hold of Frodo it becomes harder for him to resist its evil temptations – a process not helped by Gollum’s obsessive desire to obtain ‘the precious’ for himself. And all the while Sam must act as the moral compass of the film, keeping the party moving and attempting to restore peace and order. At times it’s a genuinely interesting moral journey, but too often it becomes a wordy, leaden plod through tortured dialogue and awkward bromance.

Of course, as you would expect, the film ends in a climactic cliff-hanger which practically begs you to watch the final part of the trilogy, but perhaps The Two Towers, more than any of Tolkien’s other books would have benefited from a les faithful interpretation , more concise editing and less bloody talking.