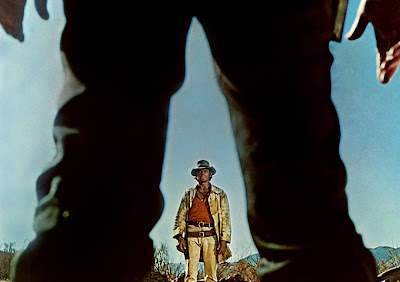 Once, the western ruled Hollywood. John Ford and John Wayne dominated the cinematic landscape, cowboys triumphed over Indians and American heroes were white men wearing Stetsons. But as the 1960s drew to a close, the genre was dying. The reasons for this were myriad: the end of the studio system; the growing distance between modernity and the frontier; the inexorable rise of technology and science fiction; the increasingly uncomfortable portrayals of women, blacks, Hispanics and Native Americans and the proliferation of cheap western TV shows which so badly diluted the brand.

Perversely, as the western’s appeal faded, Italian director Sergio Leone produced its most ambitious, original and epic movie: Once Upon A Time In The West. A sprawling 160 minute running time, stunning cinematography, Ennio Morricone’s masterful score and Leone’s artful direction combined to produce one of cinema’s most loving tributes to America’s bygone era. Seen by many as Leone handing over the cinematic baton to the younger directors who would come to dominate the seventies (Coppola, Scorsese, Kubrick, et al), the film is the triumphant final flourish of cinema’s most iconic genre.

Once Upon a Time in the West is rightly revered for its riveting opening scene: three rough and ready cowboys waiting quietly at a railway station to kill a new arrival in town. Virtually nothing happens - but it happens wonderfully. The three archetypal desperados stand, leather clad and perspiring in the high noon sun as Leone cuts artfully between them, switching from widescreen vistas to intense close-up. They say nothing, with the soundtrack instead supplied by the amplified sound effects of dripping water and buzzing flies. It’s impossible to describe quite how wonderful the scene is at it builds to one of Leone’s most memorable images: Charles Bronson filmed from ground level through a pair of dusty cowboy boots.

Bronson is the enigmatic Harmonica, in town to meet with local villain Frank (a grizzled Henry Fonda). Rather than keep their appointment, however, Frank has sent his greeting party – who Harmonica quickly and ruthlessly dispatches. Quite why Harmonica is in town is a mystery –although he quickly finds himself involved in local drama and politics – with beautiful local widow Jill McBain (the utterly gorgeous Claudia Cardinale).

In an apparently motiveless attack, Jill’s husband and children were cut down in cold blood by Frank and his goons – with Frank himself shooting dead his youngest son before framing local crook Cheyenne (a wonderfully laconic Jason Robards) for the massacre. Into the moral breach steps Harmonica, accompanied always by Ennio Morricone’s evocative musical motif, shaking up the established order and attempting to restore justice to the burgeoning frontier town.

There’s nothing particularly original in such a storyline. Indeed, many of its characters are typical Western clichés: a widowed femme fatale, a framed man, a mysterious stranger, a criminal businessman and his collection of lackeys, and the narrative has little new to say, treading the well worn path of justice being dispensed for previous misdemeanours. To criticise Once Upon A Time In The West for this, however, would be a huge mistake.

Where Leone’s film differs from so many previous genre films is in its execution. It’s a sumptuous, beautifully produced film of enormous creativity and style. Leone’s camerawork is masterful, moving elegantly between sprawling panoramas to tight close-ups of weather beaten faces, each frame composed perfectly. One scene, particularly, encapsulates this wonderfully controlled cinematography: Frank and Harmonica circle each other with vicious intent whilst Leone’s camera sweeps around the pair. Harmonica is static, the camera gently moving around his impassive face. Frank is edgy and skittish, filmed in mid-shot with the camera swooping around him. Their respective characters are reflected brilliantly – but never at the expense of the tension of the showdown.

Sound, too, is key to Leone’s artistic vision. With the supreme Morricone providing the musical score, this is hardly surprising – but Once Upon A Time In The West does not rely on music and dialogue for its rich soundtrack. Amplified sound effects bleed into one other, climb to crescendos or disappear altogether at moments of tension. Occasionally the score masks the dialogue – a deliberate ploy to keep the audience guessing. Where many directors rely on weather to replicate mood and tone, here Leone is robbed of that opportunity by the relentless sun. Instead, his sound mix does what the weather cannot – creating tension and danger through its motifs and haunting music.

There’s sadness here, too. The relentless march of the railroad across the American plains represents both progress and sadness at the passing of an era – just as Leone’s movie mourns the passing of the greatest American genre. A noble tradition ends here, replicated in the film’s moving final act as Harmonica concedes that he and Cheyenne belong to ‘an ancient race’ – one which now belongs to our cinematic past.