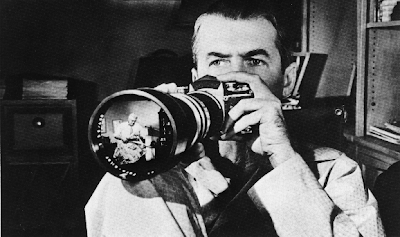 With Vertigo recently topping Sight & Sound’s poll of the greatest movies ever made, Alfred Hitchcock is back in the news. Along with Christopher Nolan, he’s the most represented director in the IMDB Top 50 and, to my great pleasure, Rear Window is his highest placed film.

Starring the brilliant James Stewart and beautiful Grace Kelly, Rear Window is set in a sweltering New York housing block. Stewart is housebound photographer LB Jeffries – a prisoner in his own home after an incident with a racing car left his left leg encased in plaster all the way up to his hip. He spends his days being massaged by an acerbic insurance company nurse, Stella (Thelma Ritter), waiting on visits from his girlfriend Lisa (Kelly) and spying on his neighbours.

Like many of Hitchcock’s films, Rear Window is hugely voyeuristic. Initially, Jeffries’ preoccupation with his neighbours is light-hearted in its nature as he smiles wryly at their foibles and eccentricities: a couple who sleep on their balcony to avoid the building’s oppressive heat, a dancer who wiggles around her apartment in her underwear and a small dog enters and exits the block via a basket lifted and lowered by his owners.

Gradually, though, Jeffries’ interest becomes unhealthy – an obsession which coincides with some darker episodes in the building. Chief among these is the disappearance of Mrs Thorwald from the opposite apartment. Her husband’s increasingly bizarre behaviour and collection of saws hint at the disposing of her body – and Jeffries is duly worried.

The women in Jeffries’ life attempt to inject some commonsense into proceedings, with nurse Stella stealing all the best lines in her cynical world-weary attempts to becalm him. Grace Kelly is a picture of poise and elegance – a fine contrast with Stewart’s portrayal of the increasingly irritable and frustrated photographer. Eventually, however, all three become exactly the kind of peeping toms Stella was so quick to criticise.

Hitchcock treats the audience as unwanted interlopers, too. The film’s claustrophobic feeling comes from its uneasy proximity to the characters. Every scene is set in Jeffries small apartment or is shown from his point-of view – and as the film progresses this viewpoint is increasingly supplied via a camera with a huge zoom lense which Jeffries peers through. Like a cinema audience, Jeffries sits in the dark peering into other people’s lives.

Hitchcock was, of course, a master of suspense. Here, that tension is created through mystery – it’s unclear whether Thorwald really did kill his wife until the very end of proceedings. As a result, we share Jeffries’ suspicions and frustrations – not least in an almost unbearably tense scene which sees Lisa enter Thorwald’s apartment to gather evidence whilst he’s out, only for the ‘killer’ to return unexpectedly. Jeffries squirms impotently, able to see everything but unable to influence anything.

The film ends with a brilliant twist of stunningly subtle simplicity which serves to hammer home a point which Hitchcock knew only too well: less is more.

Check out this amazing time lapse compilation of what LB Jeffries sees as he peers through his window - it's stunning!