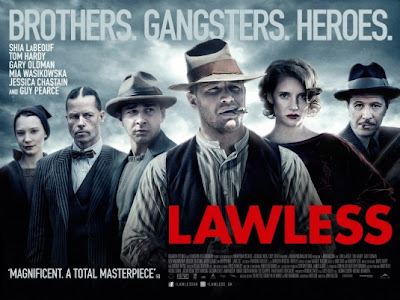 A stellar line up featuring John Hillcoat conducting, Nick Cave orchestrating and Tom Hardy, Gary Oldman and Guy Pearce in the chorus, Lawless really ought to be an epic symphony. Instead, it’s a film with a wonderful soundtrack, lush cinematography and a hole were its heart ought to be.

Based on the true story of the Bondurant brothers, the film is a Prohibition-era drama about a family of bootlegging moonshine merchants in Franklin County, Virginia. Their profits are threatened by villainous Chicago cop Charlie Rakes (a slimily effete Pearce) putting the squeeze on them. Standing up to corrupt officials is a dangerous game in such a ‘lawless’ state, however, and soon violence erupts in the Virginian hills.

Visually, it’s quite a spectacle. Hillcoat photographs the landscapes beautifully, the violence is jarringly visceral and the characters look amazing. Sadly, though, they are little more than caricatures. Jessica Chastain is the archetypal tart with a heart, there’s a crippled but loveable kid, amiable cops-on-the-take and two of the three brothers are extremely crudely drawn. Jason Clarke has little to do with violent giant Howard and Shia LeBoeuf tries his best with Jack, a kid who needs to grow up fast to cement his place in the family business. Luckily Tom Hardy’s Forrest is at least slightly nuanced – despite his tendency to grunt rather than talk.

Ultimately, it’s a solid enough film which suffers hugely in comparison to The Proposition – the last film in which Hillcoat and Cave collaborated on directorial and scriptwriting duties. That was a production full of subtly written characters to flesh out its fairly predictable storyline. Here, there is little more than some token love interests and a flashy cameo from Gary Oldman.

The movie’s middle act is far and away its most successful, with Guy Pearce’s evil Rakes spilling his bile all over proceedings whilst Forrest’s passive aggression bubbles under the surface, but sadly when the film looks set to ignite in its final scenes it turns out to be something of a damp squib, trickling to a conclusion which is wholly unsatisfying.

A film which is not nearly as good as the sum of its parts.