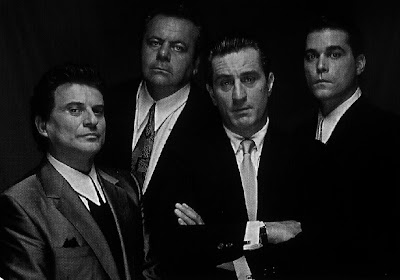 I presume you’ve seen Goodfellas. If not, you probably shouldn’t read this: it’s full of spoilers.

The inspiration for Martin Scorsese’s masterpiece, Henry Hill, died recently at the age of 69. That he survived so long is miraculous given the way he lived his life; becoming involved with the Mafia is not the safest line of work. Informing on them is practically suicide. But following his act of betrayal, Hill escaped into the witness protection act and a new life – only to re-emerge years later as something of a celebrity. He was a regular on the Howard Stern Show, opened a Wiseguys restaurant and marketed his own spaghetti sauce before eventually dying of natural causes after years of heavy smoking and heart disease.

Perhaps Hill’s newly acquired fame shielded him from violent reprisals – bumping off a media darling would’ve been terrible PR for the Mafioso who wished him dead. And wish him dead they surely did – not least when he told all to crime writer Nicholas Pileggi. Their collaboration, the novel Wiseguy: Life in a Mafia Family, would later be adapted for the silver screen as Scorsese’s greatest film: Goodfellas.

Ray Liotta stars as Henry Hill and sets out the his raison d'être from the very outset: "As far back as I can remember, I always wanted to be a gangster. To me, being a gangster was better than being president of the United States." What follows is the tale of Hill’s Mafia career, from his impoverished childhood in a violent family to the testimony that sees his friends and colleagues incarcerated.

For the young Henry Hill, the mob represents everything he has been denied: sharp suits, expensive watches and beautiful women. It means respect and being able to tell people to ‘go fuck yourself’ with impunity. This, Henry achieves in spades. His story is told via an accelerated timescale with his narration providing the links between adolescence and adulthood, before later charting the downward spiral which is documented in his prison sentence, descent into drugs and, almost, self-destruction.

The film rattles through its opening act at a ferocious pace, introducing us to numerous characters, scams and scenarios without ever becoming overbearing or confusing. This is thanks largely to some excellent editing which combines quick takes, freeze frames and Liotta’s narration to paint a vivid picture of a fraternity of criminals which it would be a joy to belong to – but a mistake to cross.

Amongst those criminals are Jimmy Conway (Robert De Niro) and Tommy De Vito (an Oscar winning Joe Pesci). The former is a man who steals for the sake of it before violently and ruthlessly despatching with anyone who can link him to stolen goods, the latter an amiable sociopath whose hair-trigger temper causes trouble for friends, foes and, ultimately, himself.

The earliest and most famous example of Tommy's unhinged tendencies occurs during a group meal at The Bamboo Lounge. Tommy gleefully regales his fellow Mafioso with an anecdote about telling a cop to “go fuck your mother” as they laugh uproariously. When Henry remarks that he’s “funny”, the mood quickly shifts as Tommy turns on his friend. Like many of the film’s key scenes, the dialogue here was largely improvised. Other than Liotta and Pesci the actors had little idea what to expect from the scene – hence the shocked look on their faces as delivers the movie’s most quotable line with more menace than you’d imagine possible: “Funny like I'm a clown? I amuse you?”

The only laws that apply to these men are the ones they impose upon themselves – and the only threat of violence against them comes from Tommy. They bribe cops, steal and extort with no consequences – until their greed begins to exceed their abilities. Scorsese’s direction here is absolutely magnificent, charting the spiralling paranoia, double crossing and increasing violence with consummate skill and great flair.

The beginning of the end comes in the much celebrated prison scene where Henry and his pals smuggle meats and wines into their shared cell, cooking up a storm with their fine ingredients and garlic “sliced it so thin it would liquefy in the pan with a little oil”. After this, however, cocaine appears on the scene, poisoning bodies and minds. From here, the romantic sense of camaraderie and togetherness dissolves.

As the net closes around Henry, we see a day in his life. It’s a whirl of home-cooking, arms dealing, drug consumption and extra-marital sex. All the while, Henry is watched by cops in helicopters. It’s an intensely claustrophobic sequence which juxtaposes Henry’s duty to his family with his out-of-control drug habit and desperation. Liotta plays it brilliantly, his pallid skin sweating coldly as his appearance grows increasingly dishevelled and the situations he finds himself in become almost farcical – not least his favoured drug mule refusing to work until she locates her lucky hat.

In the end, the Mafia bonds are broken as Tommy is murdered as revenge for his kicking to death of a made man, family boss Paulie (Paul Sorvino) turns his back on Henry with a derisory gift of $3200 and Jimmy tries to set up hits on both Henry and his wife. With nowhere else to turn, Henry rats – but even after his trial the fact remains that he loves the gangster lifestyle, lamenting being an “average nobody” for the rest of his life.

Goodfellas has been accused of glamorising the mob, but to believe this is to miss the point. Of course the Mafia was an exciting place to be for young men – it brought them untold power and riches. But it came at a cost, destroying relationships, ending lives and resulting in prison sentences. But without showing us those highs, Scorsese could not have explored the lows nearly so effectively. Henry has to face up to life as a regular Joe, but worse, as a traitor to the unquestioning loyalty and camaraderie he has destroyed through his actions. And the real power of Goodfellas is that, despite his dubious morals, it’s difficult not to empathise with him.