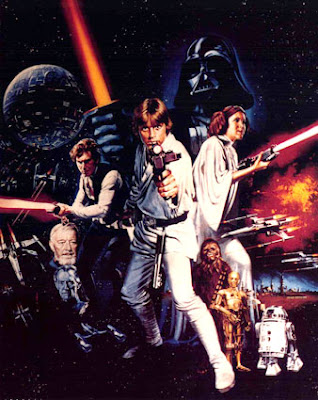 As a kid, I had a lot of Star Wars toys. As an adult, I can’t really remember what the appeal was. Perhaps it was the dire prequels which soured my affections for the franchise? Perhaps it was George Lucas’ shameless attempts to monetise it? Or perhaps it’s just growing old? Whatever it was, I certainly don’t share the love many of my friends and peers do for Luke Skywalker and The Force.

For the uninitiated, the story is essentially a space Western, with the evil forces of Darth Vader (the voice of James Earl Jones and the body of David Prowse) gathering power for an attack on the universe’s more civilised life forms. A rebel alliance, led by the semi-mythical Jedi Knights must put a stop to this by pooling their powers and facing evil head on.

Watching the film again, it was impossible to ignore its many obvious flaws. The opening act features huge amounts of clunking exposition: not content with a written credit sequence, numerous characters talk at length about the state of the galaxy and the destructive power of the Death Star. This mightn’t be so bad but it’s extremely pedestrian and the dialogue is honkingly bad. It seems that Sir Alec Guinness is the only actor aware of this – his tongue seems to be firmly in his cheek.

The worst speech comes from the movie’s most irritating character. Camp android C3PO (Antony Daniels) is required to do the speaking for two, talking for R2D2 as well as for himself. He’s clearly designed to be a busybody and a jobsworth, but does his camp preening really need to be so wordy and so irritating? The film’s lead protagonist, too, is more than a little annoying. Luke Skywalker is meant to be a naive youngster, but Mark Hamill’s acting talents extend little further than whining and moaning like a spoilt child. There’s little wonder his post Star Wars career was largely unsuccessful.

Thankfully the film is saved when Harrison Ford turns up as Han Solo. He’s a world weary gambler with a huge debt, a big hairy friend and a clapped out space shuttle. Employed by Luke and Obi Wan Kenobi to transport them across the galaxy, his wisecracking and sexual tension with Princess Leia (Carrie Fisher) bring a welcome dose of reality to proceedings.

Sadly, the further Star Wars gets from its initial release date, the less realistic it becomes. The action takes place largely on genuine sets and the alien characters are people in costumes – for the most part. Unfortunately, George Lucas has been unable to resist the temptation to fiddle and faff with his creation, going back to retrospectively add CGI into the mix. It’s wholly unnecessary and destroys some of the charm and solidity the film initially held – not least in a badly misjudged scene featuring a newly slimline Jabba the Hut.

But Star Wars didn’t become an iconic film for no reason, and despite my cynicism there is much here to admire. Darth Vader is a classic cinema villain, John Williams’ rousing score is magnificent and some of the less human characters have become iconic – especially Chewbacca. But I grew up on Star Wars and nostalgia isn’t enough to keep me interested. For newcomers, I really can’t see the appeal of the franchise at all. Sci-fi has moved on and despite Lucas’ best attempts, his film has aged badly.