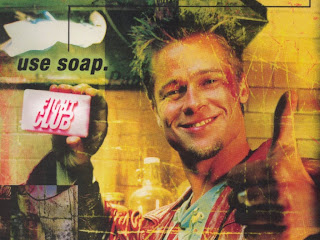 If you’ve seen the movie, you’ll be aware that this review can go no further unless I break the first two rules. But to refuse to write about David Fincher’s combustible classic would be utterly absurd... I am going to talk about Fight Club.

Chuck Palahniuk has been writing incendiary, controversially nihilistic novels for quite some time. David Fincher has been directing stylishly violent and nihilistic movies for even longer. And Brad Pitt has been flashing his diamond-cut abdominals on celluloid since his acting debut in Thelma & Louise. But despite their many successes, maybe all three of these cultural behemoths could point to Fight Club as their crowning glory.

Director Fincher was the ideal man to helm the silver-screen version of Palahniuk’s source material – his previous films were pitch-black, paranoid, off-kilter gems like Se7en and the criminally underrated The Game. Bringing in Pitt and Edward Norton (fresh from his portrayal as a muscular Neo-Nazi in American History X) was inspired, and employing The Dust Brothers on soundtrack duties was a masterstroke. Between them, they produced one of the most iconic, oft-quoted, visually arresting films of the nineties – perhaps of all time.

Living in his impersonal Ikea-like apartment, Norton’s nameless Narrator explains how he came to reject consumerism in favour of anarchy. Suffering crippling insomnia, a doctor advises him that real misery can only be witnessed in a support group for sufferers of testicular cancer. Far from curing him of his malady, the experience thrills him, leading to an addiction for similar groups for the terminally ill. Here, he meets fellow ‘tourist’, Marla Singer (Helena Bonham Carter), a woman with whom he forms a wholly unhealthy co-dependency.

Even stranger than Marla is Tyler Durden (Brad Pitt), a charismatic soap salesman whom the Narrator meets on an internal flight. After swapping business cards, the pair are forced under the same roof when the former’s apartment is blown to pieces in a mysterious gas explosion. In Tyler’s squalid home, and under his new friend’s nefarious influence, the Narrator gradually begins to let go of his neuroses and obsession with stuff and things - before finally rediscovering his masculinity in a series of testosterone fuelled brawls in car-parks and basements. These are Fight Clubs, where emancipated men can rediscover their primitive selves through visceral violence – and where the seeds of the anarchic Project Mayhem are planted.

Despite Edward Norton’s excellent performance and superb supporting turns from Bonham Carter and Meat Loaf, the movie belongs to Brad Pitt. His Tyler Durden is a cult classic character - when ASOS initially launched itself in the UK it sold copies of practically every item in Tyler’s wardrobe, and he was voted Empire’s number one film character of all time. Little wonder. Tyler Durden the man other men want to be: he’s absurdly good looking, built like a brick shit-house and cooler than a penguin’s frosty bits. But Tyler is about more than just appearances. he’s a magnetic rebel-with-a-cause, pissing in your soup, fucking your girlfriend and beating the shit out of you – but still able to convince you that his anti-consumerist, violent brand of anti-social behaviour is an attractive and viable proposition.

Admittedly, Fight Club does unravel somewhat as it hurtles towards its inevitable conclusion. This is partly due to Tyler Durden disappearing for a while, but mainly thanks to the escalation of Project Mayhem’s war on society: the Narrator’s early disillusionment is easily understood, and his gripes familiar to many – but as he becomes the unwitting ringleader of his guerrilla army it’s increasingly difficult to empathise with their all-out assault on civilisation. That said, Tyler’s shaven-headed return comes with a magnificent twist which you really ought to have seen coming...

Fight Club is an unlikely mixture of visceral violence, exhilarating action and social comment: a film about masculinity-under-attack which leaves its audience battered, bloodied and utterly exhilarated. A masterpiece.
Posted by The Author at 13:51