The Hobbit: An Unexpected Journey 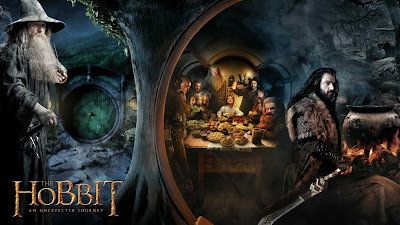 Peter Jackson’s Lord of the Rings trilogy was a huge success. Not only did it garner widespread critical acclaim, it also managed to appease the obsessive Tolkien aficionados who treat the source material with the kind of reverence normally reserved for religious writing. Despite this, however, rumours abound that Jackson has played faster and looser with his adaptation of The Hobbit...

Toying with the cinematic form (3D, IMAX, 48 frames a second) is always risky, but the director’s biggest risks here have been in his storytelling: expanding Tolkien’s slender tome into three movies is something of a stretch, even with additional material culled from Tolkien’s own appendix to the Return of the King. Can Jackson’s artistry justify his decision making, or will he be accused of selling out his legacy?

Capitalising on the goodwill earned in his original trilogy, Jackson immediately returns his audience to The Shire and its inhabitants: both Ian Holm and Elijah Wood reprise their roles in the prologue. It’s a wise move, instantly transporting fans back into a reassuringly familiar world. It’s a move which works doubly well as young Bilbo Baggins’ (Martin Freeman) home comforts are destroyed by a band of gluttonous dwarves raiding his dining room and devouring the contents of his pantry.

Along with the returning Gandalf (Sir Ian McKellen), they are Bilbo’s companions on his Unexpected Journey to the Lonely Mountain. There, the group will attempt to reclaim the dwarves’ home and steal back their treasures – stolen from them years previously by the dragon Smaug. Bilbo’s role is to be that of burglar: he’s even smaller than the dwarves and Smaug will have never smelt a hobbit’s scent before.

In comparison to Frodo’s attempts to eradicate evil and save Middle Earth, this is an altogether slighter tale – reflecting its origins as a book for children. As such, the dwarves are largely comic caricatures, there are songs, fart jokes and a generally lighter tone.

That’s not to say this is a knockabout farce, however. There are numerous flashbacks of battle-sequences and beheadings which are far closer in tone and content to the original films. These are gruesome, dark and scary – and by far the best scenes on display. It’s a strange dichotomy, though – the comic fun and slapstick of the crudely drawn dwarves’ adventures jars terribly with these scenes.

These contrasts exist throughout: introducing a whole new cast of characters was always going to be difficult, so Jackson seems to have decided not to bother. Instead he focuses on just a few of the dwarves, adding back-story and personality to a select few. This might have been a wise decision, but it’s undermined by his determination to re-visit characters like Saruman, Elrond and Galadriel who have no place in the original novel. Rather than this mixture of old and new, the film would’ve benefitted greatly from a sharper focus.

In the editing room, too, Jackson might have worked more effectively by adhering to the mantra of ‘less is more’. As wonderful as it is to see Sylvester McCoy back on screen as the eccentric brown wizard Radagast, his scenes could easily have been culled from the film without affecting the storyline in any way. Similarly, absurdly long chase sequences (almost cartoonish capers) would have benefitted from judicious editing.

Thankfully, the performances are good. Martin Freeman justifies Jackson’s faith in him (production was closed down for several months to accommodate the filming of Sherlock), Richard Armitage’s brooding Thorin Oakenshield has charisma and gravitas, and Ken Stott’s twinkly-eyed Balin is a lovely creation. As is often the case, however, it’s Andy Serkis who steals the show.

The famous encounter between Gollum and Bilbo is by far this film’s greatest moment. Despite being disguised beneath layers of CGI, Serkis’ motion-captured physicality and expressive vocal performance lend Gollum a genuine humanity. The to and fro between the two characters as they riddle back and forth is utterly beguiling – and, despite the outcome being pre-determined, there is a genuine sense of peril given how high the stakes are.

It’s a shame the rest of the film didn’t match the high standards of this showdown. An Unexpected Journey is, as we all expected, far too long and a little self-indulgent. It’s also wildly inconsistent, with elements of fantastic drama sitting uneasily alongside elements of farce. Peter Jackson’s previous output has been at its strongest when playing to a more adult audience, with wrong turns taken when dumbing down for the young ‘uns. Here, he doesn’t know what to do, and his film suffers for it.

Let’s hope lessons are learned before the next instalment. And the one after that...
Posted by The Author at 20:17