THE IMDB TOP 50 CHALLENGE #12 LOTR: The Return Of The King 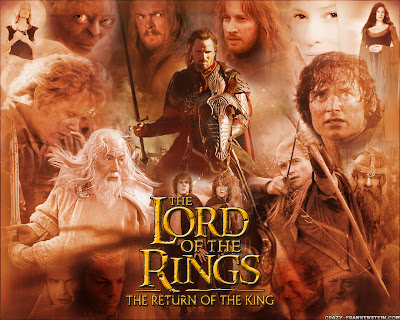 With the recent release of The Hobbit, Peter Jackson has been accused of diluting his legacy. The prequel to his famed Lord of the Rings trilogy has been accused of dumbing down the source material and, even worse, attempting to cash in on JRR Tolkien’s revered writing. Sadly, those accusations hold some water – so what better time to remind ourselves of the power and majesty of The Return of the King.

While The Fellowship of the Ring set the scene wonderfully, The Two Towers felt like filler before the main event – the climactic conclusion to the epic tale of good versus evil. For the uninitiated, the story sees a group of hobbits, humans, dwarves, elves and wizards set out to destroy the ‘one ring’ – a piece of jewellery cast from pure evil. Should they fail in their mission, Middle Earth will be overcome by the dark lord Sauron’s armies of darkness and the age of man will come to an end. Serious stuff.

And The Return of the King is by far the most serious of the trilogy. Aside from occasional quips from Gimli the dwarf, this is a much darker, scarier film in which Peter Jackson’s history in the horror genre comes to the fore. There are some grotesque creatures on display, blood and slime spilled, wounds inflicted and the deaths of key characters. Mental illness features, as does the attempted burning alive of a wounded man – this is a Lord of the Rings film for adults.

That The Return of the King is not a flawless film is not really Jackson’s fault. He has remained doggedly faithful to the source, with only the cutting of Saruman’s scenes (restored in the director’s cut) and the scouring of The Shire missing. Sadly, this means that at some points the action plods a little – notably whenever Frodo and Sam are featured on the road to Mordor. Even when reading the books (many years ago) these chapters dragged somewhat in the midst of the action packed battles between men and orcs.

It’s those battles where the film really shines. Huge fights occur regularly, with Sauron’s evil hordes fighting the human race in a series of set-pieces involving some of the greatest choreography, CGI and costumes ever seen. With castle sieges, trolls, undead armies, cavalry charges and an impressively aggressive Gandalf involved, these scenes were always likely to hold the interest, but it’s the human drama neatly interwoven into the action which marks these fights out as something truly special: Aragorn’s rousing speech, Arwen and Theoden’s tender reunion, Merry and Pippin’s beguiling bromance.

Of course, the film goes on far too long and features at least three separate endings where one would suffice, but these are merely an accurate reflection of Tolkien’s sprawling narrative rather than any kind of self indulgence on Jackson’s part. And why would anyone want to hurry away from the magic of Middle Earth anyway?

Despite its over-earnestness and occasional impenetrability, Tolkien’s text is a classic example of traditional storytelling in which he created an entire world of magic, adventure and originality: a world which would have been impossible to recreate outside our imaginations - were it not for Peter Jackson’s vision and genius. And for that, we might even forgive him for The Hobbit.
Posted by The Author at 17:17