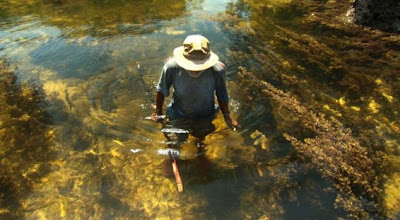 Steeped in the folklore of fisherman, Wavumba (which means “those who smell of fish”) explores director van Velzen’s early memories as a young white child in coastal Kenya. Here, the sea is the source of both life and culture, providing food for the plates and for the mystical stories of the local shamans. The storytelling tradition is celebrated here, and nobody is more celebrated than the heroic fishermen who brave the seas.
Perhaps the most heroic of all (it remains unclear how much of his ‘legend’ is to be believed) is Masoud. He’s a shark-killer of great repute, a sinewy, knotted old man with ragged clothes and calloused hands who has wrestled 400kg fish into his tiny wooden boat unaided. But as the years advance, Masoud finds himself increasingly reliant on his grandson Juma – who suffers his grandfather’s castigation and criticism with humble stoicism. As the season turns, and with age creeping up on Masoud, he sets out to catch just one more shark…

Wavumba is a beautiful film, crafted with a love and care which mirrors the affection van Velsen clearly holds for his former home. His style is unobtrusive, with no obvious attempts to influence his subjects or coerce performances from them. Instead, he documents what he sees without judging, gaining terrific insight into Masoud and Juma’s world in a way which suggests great intimacy between the director and his subjects.

Four storytellers share the folk history of Kenya in sumptuously shot scenes which show nothing more than their expressive faces, Juma’s muscles bulge as he rows his grandfather out to sea, and Masoud’s eyes dance as he tells shares his elaborately exaggerated tall-tales.

At times, the camera zooms into impossible close-ups of the old man, depicting every wrinkle on his sun-beaten face or each scar on his damaged hands. These moments are all the more impressive when they occur at sea – with at least three people crammed into a tiny rowing boat it’s difficult to conceive of how van Velzen created some of the angles he filmed from. He’s equally adept away from the water, too. The glorious scenery is beautifully framed and some of the imagery stunning – not least a late night hunt captured in the smouldering glow of Masoud’s homemade torch.

Despite the stunning visuals, the real star here is Masoud. He’s the kind of character who can only exist in documentary – it would be impossible to invent him. Whether his mythology can be believed is a moot point – he believes it and that’s all that matters. Such self-conviction might be seen as arrogance in someone else, but Masoud is so completely charming that he’s never less than utterly loveable – even when barking orders at Juma.

Of course, Masoud’s quest for his final catch is not just about killing one last shark. Rather, his aim is to re-live, or perhaps prolong, his glorious youth. With his twinkling eyes and sing-song voice, it’s easy to imagine him as a younger man – van Velzen has done a terrific job of capturing and portraying his enthusiasm and exuberance. This quality disappears, however, as the film reaches its climax in Masoud’s fearsome and violent hunt for sea-snakes.

In this scene, the warrior is revealed. Masoud is ruthless and brutal, smashing his prey with the flat of his machete blade and, at once, it becomes obvious why this tiny, wrinkled man is held in such high regard.
It’s a shame that Masoud’s captivating story isn’t the only narrative on show here. Although director van Velzen’s personal history has clearly informed his knowledge and affection for Kenya, the scene-setting scenes early in the film which explain his past add very little to the film. The story of van Elsen’s childhood might add a little context to proceedings, but it almost seems like a vanity for him to add his younger self to the action. His poetic narration is more assured and, at times, reminiscent of Mark Cousins’ lilting voiceover work. This was the only presence he needed to present in his finished film.

Wavumba is a beautiful and evocative documentary which moves sedately through a romanticised world of dreams, myths and legends. It makes no attempt to steer the audience towards which version of events is true – and is all the stronger for it. As it seems unlikely that such a niche subject will receive a wide release in the UK, you’ll need to seek this little treasure out for yourself.
Posted by The Author at 11:07