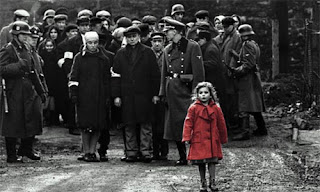 I’ve never been a huge fan of Steven Spielberg. Far too often his filmmaking veers into mawkishness and sentimentality. His best work occurs when that soft-centre is hidden: the cynicism of Indiana Jones, the horror of Jaws, the brutality of Saving Private Ryan’s opening scene. He’s tackled big issues such as slavery, war and even the sacred cow of American presidency. But none of his ‘serious’ pictures can match the emotional weight of the magnificent Schindler’s List.

Based on Thomas Keneally’s account of Oskar Schindler’s philanthropy, the story tells of a selfish German businessman who gradually transforms himself into the hero who saves 1100 Jews from slaughter at the hands of the Nazis through their employment in his factory.

Bravely (and accurately) Spielberg initially portrays Schindler as anything but heroic. Liam Neeson’s angular features are formed into a semi-permanent sneer as her carouses the SS and caresses showgirls and secretaries alike, motivated only by his libido and his desire to make money.

But as the horrors of the Krakow ghetto become increasingly apparent, so Schindler begins to melt. Key to this is his relationship with Itzhak Stern (Ben Kingsley), the wily Jew he employs to run the business side of his operations.

Stern is an irreducibly good man. He fills Schindler’s factory with some of the weakest and most vulnerable members of the Krakow ghetto, and this inherent goodness slowly begins to rub off on his patron. Their relationship is beautifully subtle – often they communicate without speech, but gradually come to care and respect one another deeply.

When a one-armed man Stern has taken in is brutally murdered by the SS, Spielberg instantly ramps up the tension. As an audience we are made painfully aware that the occupying forces are cruel and sadistic– and the point is forced home (admittedly rather clumsily) as we see Jews forced to sort through piles of their murdered compatriots’ possessions, spectacles and gold teeth. These kinds of images are perhaps a little clichéd, but they remain powerful thanks to their underlying truth.

Further atrocities are committed in Hitler’s name, with an assault upon the ghetto leading to senseless murder, infanticide and families torn apart. One doctor euthanizes an entire ward of patients rather than leaving them at the mercy of the Germans. It’s horrifically harrowing – and is observed by Schindler from a vantage point high above the city.

It is from here that he sees arguably the film’s most iconic image: a little girl wearing a red coat, wandering alone through the city streets. Later on, that same girl, still clad in her coloured clothing, is seen dead – dumped atop a pile of burning bodies. This, and various other stories, rumours and motivations lead Schindler into his acts of charity, although it is never made entirely clear quite why he risks everything to save ‘his’ Jews. Perhaps the whole point is that even a morally conflicted man like Schindler is impossibly good compared to the evil of Nazi Germany.

Emblematic of that callous cruelty is Ralph Fiennes’ Amon Goeth. His barbarity is a case-study of evil for evil’s sake: standing naked on his veranda using Jews as target practice, indiscriminately firing into crowds of people, hypocritically taking a Jewish mistress and then beating her. He’s an interesting counterpoint to Schindler’s ambiguous morality, and their scenes together are powerfully played by Neeson and Fiennes.

The whole movie is crafted with consummate skill and care. The acting is unfussy and affecting, the cinematography stunning. Shot in crystal clear black and white, this is a sumptuous film to look at, dating not a jot since its release twenty years ago. This timelessness is underlined by an acclaimed orchestral soundtrack which heightens the many moments of emotional intensity quite brilliantly.

Occasional lapses into mawkishness or predictability can be forgiven when a film about such a significant event is so wonderfully made. This is essential viewing for any student of cinema, history or humanity.
Posted by The Author at 23:55