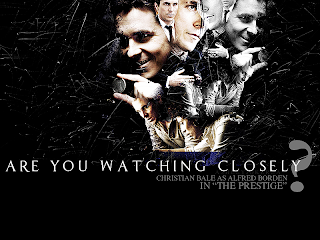 Christopher Nolan is one of the most feted filmmakers in the world and for good reason. He blends the cerebral with the spectacular in fine fashion, creating blockbusters with brains and creating compelling characters – a rarity in a world where tent-pole summer releases rely on relentless action rather than any sense of plot of character development. Yet somehow, The Prestige has become Nolan’s forgotten film. An amazing cast and intricate plot proved spectacularly successful for Inception, but here the presence of Bale, Jackman, Caine (and even David Bowie) did not have nearly the same impact.

Perhaps this can be attributed to the Victorian setting: in all regards this is an old fashioned film. There is little CGI, with the film relying on traditional mechanical effects where possible (an approach Nolan continues to employ) and the art of storytelling to create its impact. Even the performances (particularly Hugh Jackman’s vaudevillian) are pleasingly old school.

Based on the novel by Christopher Priest, The Prestige tells the tale of two stage magicians: American showman Angier (Jackman) and his working class rival Borden (Christian Bale). Their enmity is born of a tragic stage accident which sees Angier’s wife perish on stage and is fuelled by a dangerous sense of one-upmanship. The desperate desire to outdo one another becomes centred on a stunningly simplistic trick: The Transported Man.

Michael Caine’s charming explanation of the three part magic trick - the pledge (the set-up), the turn (the twist) and the prestige (the unbelievable finale) – opens the film, playing over the thrilling denouement of The Transported Man and the conclusion of the film itself. What follows is an explanation of how we came to this point in a multi-layered narrative which moves backwards and forwards in time and across countries.

Of course, the real intrigue in the film is in the magic. The mechanics of the craft are discussed and revealed, the science explored and debated. But above all else the audience is reminded that this is all a trick. From the outset Nolan asks his audience, “Are you watching closely?” – suggesting that there is a deception lurking beneath the surface sheen of his film. And as an observer you know you are about to be fooled – but how?

It’s a daringly devious trick from Nolan which, if discovered partway through the tale might ruin its telling. But having failed to spot it the first time, a second viewing serves only to confirm just how audacious the sleight of hand really is. Subtle it ain’t, but like all the best magic tricks the art is not in the trick itself, but in the misdirection which disguises it.

Perhaps the film’s (relative) lack of success can be attributed to the unsympathetic characters – neither Angier nor Borden are particularly likeable. Perhaps the twist which sees magic become science (courtesy of Bowie’s Nikola Tesla) was too hard to swallow. But for sheer showmanship, The Prestige is a film which deserves to be seen. And then seen again – so you can work out what you’ve just seen!
Posted by The Author at 17:13