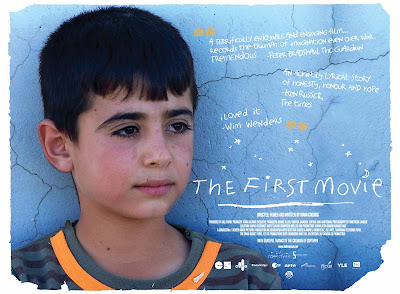 The village of Goptapa lies 80 miles from the Iranian border in Iraqi Kurdistan. Here, the adults run their small farms, pick crops and teach in the new village school. The majority of the 700 inhabitants live in mud-constructed buildings around which chickens, geese and cows freely wander. The surrounding countryside features river valleys, pomegranate groves and lush green fields where livestock graze.
It’s a world away from the Iraq we see on the news. There are no soldiers, no armoured vehicles, no artillery shells or explosions. But Goptapa has suffered at the hands of Saddam Hussein’s regime – the government gassed the village in 1988 killing many of the residents.

A whole generation of children have been born into Goptapa since the massacre, and it is here where Cousins focuses his camera. Erecting a makeshift cinema in the village, the power of cinema is described, explored and illustrated by both Cousins and the children themselves as they are bequeathed with high-definition digital cameras and given the freedom to produce their very own first movies.

Cousins is an utterly charming presence throughout. Although rarely seen in front of the camera, his lyrical voiceover knits together the action wonderfully. Lilting and mellifluous, his gentle Northern Irish accent describes and explains the power of film in his childhood, tying his project to the reality of growing up during the troubles in Belfast. It’s easy to see why he would want to strip away the dramas and the troubles of conflict, focusing instead on the humanity of the place. Indeed, the fact that Goptapa is in Iraq is not even mentioned until the film is seventy minutes old.

One brief montage of clips speaks volumes about the power of both cinema and children’s imaginations: a series of moving images appears on the screen as Cousins speculates as to how they could be interpreted by the kids. Thus, a digger becomes a dinosaur: something prosaic becomes something magical. It’s a distinction which is at the heart of the film. In a similar vein, the production of half a dozen balloons seems emblematic of something bigger or more important – that so many children can derive so much pleasure from something we take for granted is humbling – and provides some wonderfully colourful and joyous scenes.

The cinema which is constructed in which to show the films might be the greatest theatrical venue of all time. Stitched together from a number of bed sheets and stretched over a frame, the screen is simplicity itself. In the background vibrant pink and gold cloth flutters in the breeze as plastic chairs are arranged in the ‘auditorium’. It speaks volumes about the power of cinema that the wordless construction of such a simple space can invoke such emotion in an audience. The screenings themselves offer further magic. Having never seen a film before, the excitement of the kids is palpable as they cheer, clap and attempt to grab at images on the screen during performances of ET, The Red Balloon and others.

In the aftermath, a colourful collection of children are lined up against a wall as they are quizzed on the kind of films they’d like to make. It’s almost reassuring that these kids from rural Iraq are as imaginatively puerile and silly as any kids you’d find in this country. As they grab their crotches, show off and throw out ideas about dogs eating donkeys it doesn’t matter a jot where they are from. Like many of the scenes in the film, it’s beautifully shot. The camera lingers just long enough on each subject, moving up and down the line to capture the reactions to what is being said by the attention-grabbers at the forefront of the conversation and the questions posed are aimed at eliciting honest responses – Cousins manages to leave any pre-conceptions about the kids aside.

What they produce is fantastic. A close-up of a goldfish tank is accompanied by a magical voiceover; a group of girls sing for the camera; a long single take sees a young boy confiding his thoughts in the mud. And for almost the first time, adults are present in Goptapa. The film was made during Ramadan, and with many of the grown-ups fasting, the children had almost had the town to themselves. But with cameras in hand, access was granted to the areas Cousins had failed to get – not least when one amateur filmmaker gets footage of his friends giggling in the back of the mosque as the men of the village pray.

The most moving footage in the film was produced by the children. Static camera shots of long, emotional monologues reveal the horrors which occurred as the 1988 massacre swept through the village. As an elderly lady recalls the events you cannot help but admire the bravery of both the subject and the camera-operator. The story itself is a difficult one to tell, but as she breaks down, angers and cries, the child with the camera waits, lingers and ekes still more drama from the situation. It would be a powerful scene in the hands of someone infinitely more experienced: perversely, lack of experience makes it more powerful still.

The soundtrack is fantastically judged, adding an elegance to the sumptuous images which describe the action. It’s also a good match for the quality of Cousins’ eloquent narrative. The only time this changes is as the children’s’ films are shown – at this point Kurdish music becomes an entirely appropriate accompaniment.


Mark Cousins has produced an excellent documentary which avoids political rhetoric or cheap stunts to make its point. Allowing his subjects to express themselves verbally and visually, he has given voice to the power of imagination, the resilience of the human spirit and the educational and exhilarating nature of cinema. His non-judgmental, inclusive style, easy demeanour and technical prowess have ensured that this is a production which engages, informs and stirs in equal measures. A wonderful film.