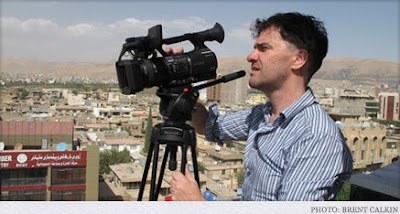 After attending a screening of The First Movie at Hyde Park Picture House in Leeds i was lucky enough to speak to filmmaker Mark Cousins in a Q&A session about the documentary an his experiences of making it.

In 2008, Mark Cousins and his crew of five arrived in Goptapa, Iraq. This small rural village would become the location for his first full-length feature, The First Movie. In it, he would explore the power and magic of cinema by showing the local children their first ever films before furnishing them with digital cameras and inviting them to make their own.

The regime of Saddam Hussein brought severe hardship to Goptapa, none more so than the Anfal massacre which saw over 100 villagers gassed to death as part of a programme of ‘ethnic cleansing’. A whole generation later, Cousins’ motives are to explore whether, as he suspects, the power of imagination – and particularly cinema – is more real to children than the horrors of war. It’s a more autobiographical conceit than one might expect – Cousins himself grew up during the Northern Irish Troubles and his unshakeable belief in the importance of such escapism underlines his determination to get the film made.

The documentary itself reveals little of the hardship which beset its production – but a month of scorching heat, poisonous scorpions and the shadowy presence of the Iraqi Secret Police are barely hinted at in a sumptuous looking and heart-warming film. This deliberate choice to redescribe a particular part of the world is best explained by Cousins himself: “I’m not a journalist so I thought I’d stick to what I know and there’s imagery and so much of the human spectrum that isn’t being portrayed from the Middle East... People are portrayed as collective rather than individual: people punching the air or grieving. I just thought – let’s do none of that and see what’s left”.

The scene in which a makeshift cinema is constructed from colourful cloth flapping in the breeze, a few plastic chairs and a screen sewn together from bed sheets is truly magical. The reaction of the children is extraordinary as they reach for things on the screen, shout, squeal and holler – Cousins describes it in words such as ‘luminosity’ and ‘aliveness’.

But nothing in the build up can prepare an audience for the miraculous movies the children make. Armed with their digital cameras they produce moving, insightful and stirring films about local myths, the genocide and their hopes for the future. The children are not restrained by convention and as such their imaginations can run free – serving up cinema as refreshing in its approach and honesty as it possible to be.

The free rein allowed to the children was a consequence of Cousins’ determination not to be seen as an educator and he was careful to avoid “an ‘eat your greens’ attitude” and a sense that this was “good for them”. Instead, he acted as a facilitator, allowing the innate talents he had witnessed in Goptapa to shine through: “Display and poetry is very natural to this world and I think I was just going along with that. I was interested in filming inside the minds of the children and getting a sense of what was inside those Aladdin’s caves”.

He’s achieved exactly that.
Posted by The Author at 11:48