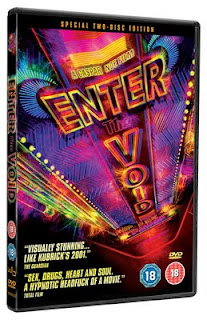 After the visceral brutality and sexual violence of Irreversible, Gaspar Noe has carved a niche for himself as a maverick with a singular artistic vision – and as a filmmaker who is utterly unafraid of controversy. Enter The Void is no exception, charting drug-use, death and explicit sex in a lurid explosion of neon, banging beats and nausea-inducing camera work.

Telling the tale of unwitting Tokyo drug dealer Oscar (Nathaniel Brown), Noe places the audience smack in the middle of the action. Making a delivery, Oscar is killed within minutes of the opening. His soul hovers momentarily over his corpse, as it takes in the ensuing carnage, and then moves away from reality and into the metaphysical world as it explores Oscar’s life, travelling the space and time on the journey which has ultimately ended in his untimely demise – and will conclude with his inevitable reawakening…

Blasting onto the screen, the movie opens with a dazzling title sequence. It’s a hyperkinetic surge of colourful graphics and throbbing techno which burns the cast and crew’s names onto the audience’s retinas. From the outset it’s clear that Noe’s intent is to make a striking impact – and he certainly does.

Rather than continuing in this garish and cartoonish vein, however, the opening scene moves away from vibrancy and colour into a muted colour palate and a more sedate pace. Placing the audience squarely in the scene, Noe utilises a first-person perspective as the world is seen through Oscar’s eyes. He makes small talk with his sister Linda (Paz de la Huerta), smokes drugs and talks Buddhism with a friend. It’s dreamy, hazy and, at times, uncomfortable viewing – the swirling, see-sawing motion of the camera induces a motion sickness which is an entirely deliberate ploy to draw the audience quickly into Oscar’s stoned state of mind.

But just as quickly as you become accustomed to Oscar’s worldview, his perspective is transformed: he’s shot dead by police. As his soul leaves his body, it is transported above the action, and from here it takes on a new life, as it swoops and soars above the city. Brilliant camera work – particularly airborne tracking shots above Tokyo – and some fantastic editing allow Oscar’s soul o glide through the city and streets, and pass through walls and ceilings as he observes his stripper sister having sex with her lover, his own corpse being moved by police and his friend Alex (Cyril Roy) distraught at what has happened. It’s thrillingly voyeuristic stuff.

Sadly what follows this dreamy, exhilarating opening is not nearly as creative or as interesting. Instead we revisit Oscar’s life via a montage of interlinked flashback sequences. Like the rest of Enter The Void, they are slightly surreal, but their style is much more prosaic and predictable. Despite that, Noe still manages to create some arresting visual images and some interesting thematic ideas. But above all else, what shines through is some sloppy symbolism and some shoddy acting.

Initially the flashback sequences looks at Oscar’s relationship with his sister. Mixing and merging scenes of their childhood and adolescence with scenes of their adult lives introduces, it creates the idea of a creepily incestuous relationship. Some overwrought and clumsy scenes of the siblings kissing, bathing and swimming with their mother are cut with images of Linda breastfeeding. The characters (and their ages) become interchangeable and it’s, quite frankly, absurd.

Given his ubiquitous presence throughout this sequence, it’s sad to find that Nathaniel Brown as Oscar is simply not an actor cut out to carry a film. He’s wooden, to say the least, and his slacker accent and low key voice are almost lost in the aural wall which Noe builds around his action. Most of the performances are mannered to say the least. Paz de la Huerta pitches Linda somewhere between childhood naivety and permanently high in a performance which grates slightly. Arguably the best of the bunch is Cyril Roy as Oscar’s artist friend Alex – he at least sounds a note of realism.

With such inconsequential and irritating characters, the narrative also needs to be stronger to carry the film. The recurring motif of The Tibetan Book of the Dead hints clunkily and clumsily at exactly where the plot is going. There was simply no need to paint-by-numbers for an audience who would have been well capable of discerning the plot’s deeper meanings without signposting them so obviously.

Enter The Void is beautifully, skilfully and inventively crafted. But it is a triumph of style over substance. All the clever camerawork and amazing editing in the world cannot save the film from its plodding plot, overwrought symbolism and unconvincing acting. There’s a good movie in here somewhere, but Gasper Noe hasn’t made it yet.
Posted by The Author at 10:16