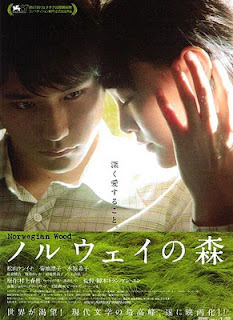 More than twenty years after Haruki Murakami’s novel was released, Vietnamese director Tran Anh Hung has turned Norwegian Wood into a feature film. Long considered unfilmable due to its introspective nature and inner dialogues, it was a brave move for Tran to take it on – especially as Murakami (and his fans) are famously protective of his work. But after a long dialogue with the author, the movie was given the green light. Have Tran and his cast done justice to the source material?

Naoko was Toru’s best friend Kizuki’s girlfriend, until Kizuki committed suicide at the age of 17. That tragedy that has led to Naoko suffering a breakdown: a depression which has led to her seeking refuge in a quiet country sanatorium.

Meanwhile, in Tokyo, Watanabe begins a flirtatious friendship with fellow student Midori, leaving him to negotiate his way through two complicated and contrasting relationships…

Opening with a quiet montage of Toru (Kenichi Matsuyama), Naoko (Rinko Kikuchi) and Kizuki (Kengo Kôra) playing pool and fooling around on a farm and eating an ice lolly, Tran quickly introduces the three central characters. That one of them will be almost entirely absent from the remainder of the movie, as Kizuki is seen committing a low-key and lonely suicide as he asphyxiates himself in his car (his presence permeates the action nonetheless). It’s an unusual way to begin a film, requiring little of the audience other than objective observation. With barely a hint of emotion expressed on screen, there is little opportunity to feel sympathy as might be expected. Instead, the audience is made immediately aware that the style of the film will be somewhat detached.

Central to the plot and style of the piece is Toru. He appears in almost every scene, yet barely seems to inhabit them. He’s something of a blank canvas, often expressionless and usually playing second fiddle to whichever other characters appear alongside him. It’s a strangely beguiling performance from Matsuyama, and he’s a likeable character despite doing very little in real terms. Instead, he provides the backdrop for the more intriguing performances which revolve around him.

The most interesting of these is Kiko Mizuhara as Midori. She’s certainly the most recognisably ‘normal’ character – lively, flirty and funny. Sadly, she’s underused and appears far too fleetingly. The same might also be said of Nagasawa (Tetsuji Tamayama). He’s enigmatic, interesting and amoral. Although his purpose is presumably to provide a moral barometer for Toru, the film would certainly have benefited by revealing more of him.

Although Toru’s relationships with Midori and Nagasawa are important, they play second fiddle to his dysfunctional friendship/courtship with Naoko. Following the suicide of Kizuki, Naoko has unravelled mentally. Following a tenderly filmed sex scene with Toru, she retreats into herself and eventually disappears to a country retreat where she lives a quiet life alongside roommate Reiko (Reika Kirishima). After a written correspondence with Toru, he eventually visits her to discuss where their future lies. The scenes between the two are beautifully shot, but ultimately hard to engage with. The dialogue is stiff, and the sense that there is any love between them is hard to believe given that it is only expressed vocally in very plain speech. Some explanation of their inner dialogues occurs by having them read out their letters as a voiceover, but a sense of true warmth and love between them still remains hard to swallow. It weakens the film enormously that the central relationship is so unbelievable.

What does work wonderfully well is the cinematography. Norwegian Wood is simply sumptuous to look at and has a clear artistic vision. Interior scenes are often shot in medium close-ups leading to a sense of claustrophobia – particularly in those scenes between Toru and Naoko. Tran also utilises very clear colour schemes, often bathing night time sets in just one colour – it’s unsubtle but beautiful. Interiors during daylight hours appear to be more naturally lit, utilising the daylight which streams in through the picturesque windows.

Exteriors are exquisitely shot. Wintry country scenes are framed fantastically and lush green countryside is displayed vibrantly. These beautiful vistas provide an instant and obvious contrast with the cluttered city sets of Tokyo. They are imbued, perhaps, with even more sadness as the camera lingers slowly and silently over vast expanses of emptiness. Such wonderful cinematography ensures that even in its more frustrating moments, Norwegian Wood remains extremely watchable.

Unfortunately, those frustrating moments occur too often. When translating a novel to the screen, one of the inherent dangers is that so much of what is written is not said (or at least said out loud). With Toru as the central character and commentator, Murakami’s novel has a depth and richness which is sadly lacking from Tran’s movie. It’s also a far more hurried version of the story with central characters marginalised to the point that their role in proceedings becomes puzzling – particularly Reiko’s surprising part in the story’s denouement.

Bringing Norwegian Wood to the silver screen was always likely to be challenging. And it’s a challenge which Tran Anh Hung only partially passed. His film is stylish and often visually stunning, yet lacks emotional depth despite some good acting performances. The plot moves inconsistently – too fast in parts, too slow in others – and ultimately characters’ motives are not as fully explored or explained as they might have been. Altogether, it’s an interesting yet flawed attempt.
Posted by The Author at 10:14