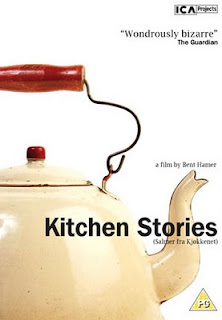 In 1940s Sweden, a home economics company (with more than a hint of Ikea about it) is conducting experiments on how to layout a successful and efficient kitchen. Having established the best set-up for women, they turn their attention to single men, and send their team of observers to watch how Norwegian bachelors utilise their kitchen appliances.

Seated on Baywatch style high-chairs, these impartial observers neatly and methodically log all movements within the kitchen. They are forbidden from interfering with their subjects in any way, and sleep outside the host’s homes in bizarrely bubble-shaped mobile caravans.

When Folke (Tomas Nortström) is assigned to log the movements of loner Isak (Joachim Calmayer) things do not look promising. More than a little disgruntled by the Swedish interloper, the elderly Norwegian initially refuses to let him in. But just as Folke looks set to quit, their relationship begins to slowly develop – and eventually blossom…

To say that the opening of the film is eccentric would be an understatement. Scenes of domestic science have rarely been as strange as these: Scandinavian housewives test all manner of kitchen appliances whilst rigged up to medical equipment and breathing apparatus, all in an attempt to gauge their effectiveness. It’s played utterly deadpan and extremely effective for it – the gravity afforded the job of ‘observer’ is established from the outset, and emphasises the sense of the absurd from the start.

This sense of the strange is accentuated as a fleet of pastel green cars cross the Sweden/Norway border, each of them towing an egg-like caravan. These are the temporary homes of the Swedish observers – barely big enough to lay down in, yet strangely homely. It’s a good job, too, as the subject Folke is sent to observe is unwilling to let him into his house.

The film is almost wordless at this point, as a series of short scenes demonstrate the stubbornness of the irascible Isak. It’s practically a silent comedy, as Isak locks Folke out, repeatedly turns out the lights on him, and even drills a hole in his own ceiling so that he can observe the observer from the bedroom above. Not only that, but he begins cooking his meals upstairs on a camping stove.

The slow transformation in their relationship is so effective as to be almost invisible. Tentative conversations begin, small favours are done for one another, and gradually the two characters become friends. The sharing of food is key to this – having seen each character eat alone, the sharing of birthday cakes and booze is in sharp contrast to a poignant scene of Folke eating alone in his caravan.

A Swedish smorgasbord is also served up at one point, with both characters enjoying the pickled herring which Folke’s aunt has sent him. It’s symbolic of the burgeoning relationship and understanding of each others’ culture that they can share such a typically Swedish meal, but also serves as a plot device when Folke’s boss turns up, and comes close to realising that the policy of non-interference has been utterly disregarded. It’s a rare moment of tension in the film, and works all the better for Reine Brynolfsson’s performance as the slimy jobsworth Malmberg.

The danger that the pair will be ‘discovered’ becomes central to the plot, as a number of near scares ensue. Isak repeatedly falls asleep in Folke’s observation chair, and is caught there by Malmberg. As well as talking his way out of trouble, he makes excuses for Folke, and thereby saves their friendship. But, more importantly, he saves the Swede’s life in a tragicomic scene caused by the jealousy of Isak’s best friend Ralph.

Clearly this is a touching and tender tale of friendship – and the fact that the characters are in the twilight of their lives makes it more touching still. But beneath the surface, the film has more to say. There are a few mentions of World War II, and its influence on the themes of the film is obvious – initial animosity between the Swedes and Norwegians has roots in resentment over their roles in the conflict. Whilst Norway fought, Sweden remained neutral, and it’s very apparent that the role of the Swedish observer in the film is a comment on their non-violent stance – perhaps implying that it’s not possible to remain neutral after all.

Kitchen Stories is a wonderfully understated – yet affecting – movie. Its heart-warming tale of friendship is what holds it together, but there is a smorgasbord of weird and wonderful events and characters which lift it above many similar films: silver fillings which transmit radio signals; a room filled with pepper; caravans pulled by horses and mishaps with mousetraps. Strangely, it’s not really a story about kitchens at all – cooking takes place elsewhere, and the kitchen scissors are used to provide haircuts. But that’s entirely apt in this beguiling, charming film.
Posted by The Author at 09:39