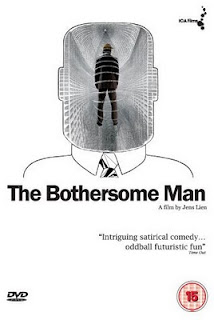 Urban dystopia has been a popular theme for filmmakers over the years. The Bothersome Man takes that tried, tested and clichéd formula and breathes new life into it by combining Orwellian menace with black humour – and more than a touch of Groundhog Day.

Following his apparent suicide, Andreas (Trond Fausa Aurvaag) arrives in a nameless Scandinavian city where he is employed, provided with an apartment and falls effortlessly into a relationship. Unsurprisingly, he soon realises that something is amiss: life is too easy, food is tasteless, and children are conspicuous by their absence. Worse still, booze no longer gets people drunk.

Increasingly anxious, Andreas attempts to inject some excitement into his life by embarking on an affair, before realising that his only option is to escape the homogeneity of the city. Predictably, his efforts are thwarted and hope seems lost – until he befriends Hugo (Per Schaaning). Secreted in Hugo’s cellar is a crack in the wall from which beautiful smells and music are emitted – could this be the escape route Andreas is looking for?

The film opens in a railway station with a scene of the least romantic kissing ever committed to celluloid. It’s distinctly uncomfortable watching a male and female character joylessly chewing each other’s mouths off as the sounds of their lip-smacking are amplified. So uncomfortable, in fact, that Andreas – the tension building on his face – takes the only way out. From the platform, he throws himself under the wheels of an oncoming train. It’s testament to how effective the scene is that his extreme actions seem entirely appropriate.

The film is ambiguous about exactly where Andreas wakes up. Clearly, he ought to be dead. But following a silent bus ride, and a half-hearted welcoming committee, he finds himself in an apartment which apparently belongs to him. Utterly impersonal and decorated in muted colours, it sets the tone for the rest of the unnamed city in which he finds himself. After reporting to an equally nondescript office block, he is given a vague job description, a functional office, and left to get on with it.

So, where has our protagonist found himself? There is a certain Ikea-style blandness and coolness which marks the city out as Scandinavian, but that remains the only certainty. There’s easily enough evidence to suggest that Andreas is in heaven – life is simple, everyone is provided for, and everyone has a purpose. But by the same token, a world where everything is bland and ‘pre-packaged’, detached and emotionless could well be interpreted as hell. Maybe he’s in purgatory? Or perhaps the film is an attack on modern, homogenous living? It’s a strength that events can be interpreted on so many levels so effectively.

It requires an excellent performance from Trond Fausa Aurvag to carry such ambiguity so convincingly – and he really delivers. It’s a role which requires a range of acting talents and Aurvag pulls off slapstick, hangdog, understatement and wild-eyed delight with aplomb. He carries the movie from start to finish: there’s barely a moment without his enigmatic presence.

A number of scenes are key to establishing the other-worldliness of The Bothersome Man, all of which are stylishly underplayed. The first of these occurs as suspicions begin to grow in Andreas’ mind that things are not as they seem. He subsequently severs one of his own fingers in a paper-cutting machine. Spouting blood, his colleagues seem oblivious to the harm he’s done himself – despite the fact that the scarlet blood seeping from his wound is the most colourful thing in their office.

A wonderfully matter-of-fact montage explains the story of how Andreas comes to be in a serious relationship with a woman he barely knows. Over the course of a meal in a restaurant, he flirts clumsily. This leads to a series of short scenes of perfunctory sex and dull interior décor, which perfectly illustrate the alarming ease with which such events occur in the narrative.

Thoroughly disenchanted with his ‘off-the-shelf’ life, Andreas again seeks the answer in suicide. In a revisiting of the opening scene, we again see torturous kissing and a man throwing himself in front of an oncoming train. Only this time it makes more sense – and carries an air of déjà vu. How Andreas survives this attempt is more clear cut – although no more explicable.

Perhaps liberated (or reawakened), Andreas becomes determined to get to the bottom of his predicament. His focus becomes the mysterious Hugo – a man who wears black and white shoes, grumbles vociferously whilst defecating, and lives in a cave-like cellar adorned with a sea of light bulbs. It’s a beautifully understated set, and it becomes key to the denouement of the film, as Andreas and Hugo attempt to unravel the mystery which lurks behind the magical (and peculiarly vaginal looking) crack in the basement. Here, the film seems ever more absurdist (and calls to mind Being John Malkovich) as it speeds towards its inevitable conclusion.

The Bothersome Man is an excellent film. The visuals are stylish, the performances assured and the direction skilful. It draws the viewer into a world which is indefinably strange yet utterly compelling. It adds a new twist to an old and familiar story, weaving elements familiar to the audience with imaginative new ideas to create a film worthy of the many awards it has garnered – and worthy of wider notice than it has received.
Posted by The Author at 09:33