Last Life In The Universe 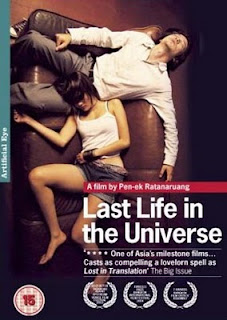 Fusing three different languages and a variety of genres, Last Life In The Universe looks to provide a fresh twist on the familiar tale of ‘boy meets girl’.

Having witnessed the tragic death of Noi’s sister, Nid, the two characters are drawn together. Despite their lack of shared language, Noi helps to bring Kenji back to life as the two lost souls give meaning to each other’s existence…

The film opens with in the colourless interior of Kenji’s apartment. Given the potential horror of what is about to occur, the scene is remarkably serene and quiet, as Kenji narrates his reasons for wanting to take his own life over blue-grey shots of neatly ordered bookshelves and draining boards stacked with plates and knives.

Just as Kenji is about to hang himself, his obnoxious brother arrives on the scene. Although never said, it is implied that his brother is involved in organised crime, and having destroyed Kenji’s contemplative peace once, things become even more traumatic when a gunfight breaks out in the apartment leaving his brother dead. Still worse, Kenji instinctively shoots his brother’s murderer dead. After concealing the bodies, Kenji is about to throw himself off a bridge when he witnesses a fatal car accident, which kills Nid.

Kenji accompanies Nid’s sister Noi to the hospital, and is thus drawn into her life. The two characters communicate in a hybrid of Thai, Japanese and English, and their stilted exchanges add to the air of vulnerability which engulfs each character. The reserved Japanese and the more outgoing Thai have little in common initially, a fact which is beautifully and wordlessly articulated as they eat together for the first time: Kenji produces his own chopsticks and meticulously cleans his plate whilst Noi smothers her meal in spicy condiments and shovels it into her mouth with a spoon in traditional Thai style.

Thanks to the clever cinematography of Christopher Doyle, colour seeps into the movie gradually as the action moves from the ordered world of Kenji’s fussily tidy home to the shambolic mess of Noi’s country house. As the vibrant hues of Noi’s life seep into Kenji’s his melancholy dissipates, seemingly insignificant moments, such as the ruffling of his own hair and failure to clean up his own coconut husk, are huge steps in the abandonment of his fastidious ways.

Equally, the order and stability which Kenji brings to Noi’s life are never explicitly stated. Instead, we see the lowering of her guard as she sees the plates he has cleaned and a stoned dreamlike sequence in which Kenji magically tidies the house without ever appearing in the scene. It appears that the quiet presence of Kenji is exactly what Noi needs as she grieves for her sister. It’s fitting that the hazy, serene nature of the cinematography is echoed in the gentle unravelling of the plot, as the two characters seek solace from their problems in each other.

Although there are hints at Kenji’s shadowy past in a couple of sudden bursts of violence and a mysterious tattoo, the Yakuza subplot which crashes into the film in the second half does seem somewhat incongruous. Although the stylised violence of the film appears largely off-screen, the cartoonish perpetrators are completely at odds with the style of the film up to that point. Perhaps Ratanaruang felt he needed to inject a change of pace or dynamics in his introspective work, but it doesn’t quite sit properly in the overall context of the movie and comes so late that it feels like it was tacked on.

There are literally thousands of ‘boy meets girl’ films available, many of which feature the well worn themes of opposites attract and love as a redemptive force. Most of them even feature a jealous or violent ex-lover and a tragedy which brings the protagonists together. Last Life In The Universe contains every one of these well worn clichés but to categorise it alongside such films would be to miss the point.

A beautifully made film which ploughs its own furrow, impeccably acted, wonderfully shot and accompanied throughout by the enigmatically hypnotic music of Hua-lampong Riddim.
Posted by The Author at 09:29