THE IMDB TOP 50 CHALLENGE #45 Spirited Away 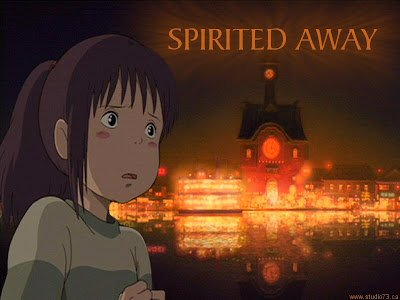 First, a disclaimer: I am a huge fan of Japanese culture. My favourite author by far, Haruki Murukami is a Japanese writer whose books are set solely within his native country. I am a regular sushi consumer. I have been known to partake in karaoke. But I draw the line at anime.

The storyline will be familiar to anyone well versed in children’s films and literature. Borrowing heavily from the likes of Alice in Wonderland, Charlie & the Chocolate Factory and Labyrinth, the tale tells of little Chihiro, a girl miserably forced to move house and abandon her childhood friends. On the journey, she and her parents chance upon an abandoned theme-park. Here, her mother and father discover a mysterious buffet and are instantly turned into pigs having ‘gobbled up the food of the spirits’. And so begins Chihiro’s quest to restore her parents to their natural state.

Her journey through the spirit world sees her take employment at a ghostly bath-house – a place inhabited by all manner of creepy and strange characters. Like the stories which inspired Spirited Away, the main interest here lies not with the central protagonist but rather with the cast of eccentric and weird caricatures she meets along her journey.

It’s a good job: Chihiro is an intensely irritating child. Much of the blame for this can be apportioned to her voice: she shouts and whines constantly, barely able to display any emotion other than wounded confusion. There’s a scene where her mouth is magically sealed shut – it’s arguably the best moment in the whole movie.

Thankfully, some (but by no means all) of the characters surrounding Chihiro are charismatic and memorable. It’s in these characters that the animators really earn their crust, creating a combination of hideously curious creatures capable of eliciting genuine sympathy – even from a cynical audience. The problem with this ensemble is that they don’t quite hang together properly: some of them look like they belong in a different film entirely.

As a result, Spirited Away looks like something of a mish-mash: a collection of scenes and characters forced together to create a feature length film. Perhaps less ideas and a more compact running time would have resulted in a cohesive movie which felt less episodic – and less of an ordeal.