THE IMDB TOP 50 CHALLENGE #48 The Shining 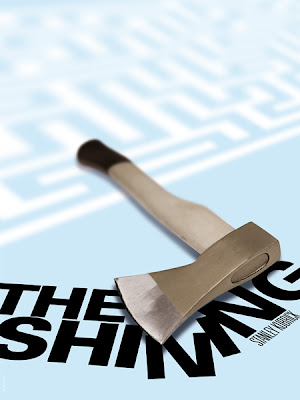 I don’t find films scary. They sometimes make me jump, they occasionally make me squirm but they never genuinely frighten me. Except The Shining. It’s creepy, chilling and nasty in the most insidious, horrible way imaginable. And Jack Nicholson’s Jack Torrance is arguably screen’s greatest monster – malevolent, violent and, crucially, believable.

Steven King’s source material is a relatively straightforward haunted house tale. Set in The Overlook Hotel, it details the mental breakdown of the winter caretaker, Jack, under the building’s malign influence. He’s a writer who’s taken the job in the hope that it will allow him time to finish his first novel. Once he and his wife Wendy and young son Danny are alone, however, the spirits which caused the previous janitor to slaughter his family with an axe begin to affect Torrance.

Stanley Kubrick interpreted King’s novel very differently. Whilst King’s novel focused on Danny, the director saw The Shining as being very much Jack’s story. For Kubrick, the supernatural elements of the story were peripheral: the psychological breakdown of Jack was key.

Much has been made of King’s disgust at Kubrick’s interpretation. He voiced his displeasure regularly and went as far as to script and produce his own (vastly inferior) mini-series. What is less well publicised, however, is his later admittance that Kubrick’s version could not be improved: ‘Could it have been done better? Over the years I’ve come to believe that it probably could not.’

Having made the decision to focus so much attention on Jack, it was vital that Kubrick employed the right man for the job. Hiring Jack Nicholson was a no-brainer. Having been embroiled in the Roman Polanski rape scandal, fresh from discovering his sister was actually his mother, and with rumours of extensive cocaine consumption, Nicholson was perfectly poised to play a man on the peripheries of a breakdown.

Occasionally his mania borders on lunacy – with Nicholson evidently relishing the opportunity to express Torrance’s madness. Grinning maniacally, at times his performance verges on the animalistic as he charges around the Overlook’s corridors like a gorilla, swinging his arms, grunting and wheezing.

Less successful was the casting of Shelley Duvall as Wendy. An inexperienced actress used to working on Robert Altman’s improvisatory movies, she struggled with the emotional and physical intensity of a Kubrick shoot: her jittery, nervy performance reflects her exhaustion and anxieties. She later confessed that she felt the director disliked her and had driven her unmercifully – and after filming one take 127 times, she was probably right.

Still, given the intensity of Nicholson’s performance, it’s little wonder that Duvall appears on edge. Jack’s obvious hostility towards his wife and child is ever apparent – even the one scene of intimacy between father and son is edged with malice as he asks, “Wouldn’t you like to stay here... forever?” The tension between the three is explained through a long scene in which Wendy tells a paediatrician that Jack had accidentally dislocated Danny’s shoulder whilst drunk some months ago. Thanks largely to Duvall’s jittery performance it’s unclear whether her account is entirely true – an ambiguity which serves the narrative well.

This scene also explains Danny’s retreat into himself and his relationship with Tony – an imaginary friend who lives ‘in his mouth’ and ‘tells him things’. Although his parents believe this to be little more than a childish fad, the audience are privy to far more information: Danny has the ability to ‘shine’. The youngster has precognitive powers and is able to communicate telepathically – leaving him sensitive to the ghostly history of the Overlook.

Much of The Shining is told from Danny’s perspective – literally. The recent invention of the Steadicam enthused Kubrick greatly and he used the new technology to its full advantage. Scenes of Danny careering around the Overlook on his tricycle remain the most famous and iconic use of Steadicam committed to celluloid.

Kubrick improvised heavily in order to produce the results required, adapting a wheelchair by adding platforms for the crew and a speedometer to ensure the results could be accurately replicated time and again. With the camera slung low to the ground and runners on either side steadying the contraption, Kubrick was able to follow Danny everywhere.

The tiny child is swamped by the wide hallways of the hotel, pedalling feverishly yet managing to put no distance between himself and the viewer – thanks to the constant proximity of the Steadicam. It’s a brilliantly effective way of illustrating the size of the Overlook and hinting at the horrors that lurk behind the locked doors he scoots past. Even the sound here is menacing – an alternate rolling clatter and carpet-muffled silence. Despite the scale of the corridors, it’s an intensely claustrophobic sequence.

Horror is everywhere in the hotel, most famously as blood pours out of an elevator and sloshes down the hallway. But it’s not just set-pieces which reveal the sinister nature of the Overlook. Kubrick utilises strange perspectives and repeated motifs throughout, often echoing Jack’s state of mind and actions. Nothing in the frame is insignificant – Kubrick had Elstree Studios bulldoze whole street scenes to build his intricate set.

Kubrick is a director totally unafraid to allow atmosphere to take precedence over action, and The Shining is a startling example of this. Relatively little actually happens until the film’s final act, with Kubrick gradually ratcheting up the tension and posing unanswered question after unanswered question. But when Jack finally tires of being a ‘dull boy’, the action accelerates towards a series of famous axe-blows, a chilling crescendo and, finally, a mysterious lingering shot of an old photograph.

In the end, it’s impossible to know for certain what happened or why. Each of the three protagonists are unreliable thanks to their fragile psyches, repressed rage, guilt and fear. Instead, Kubrick creates a multi-layered, wilfully ambiguous chiller which stringently adheres to the mantra of his great hero HP Lovecraft: “In all things mysterious... never explain!”

For real Shining geeks, http://www.theoverlookhotel.com/ is a treasure trove of related imagery, facts, trivia and art inspired by the film.

Much of the research for this article came from John Baxter’s wonderful biography Stanley Kubrick.