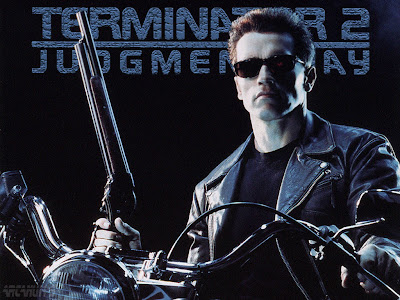 In the near future, 3 billion humans are to be destroyed in a nuclear war which will leave robots, controlled by the SkyNet operating system, in control of Earth and battling with the few remaining hman rebels who remain. The resistance will be led by John Connor, a leader so formidable that SkyNet is determined to stop him at source.

As a result, they initially sent a cyborg (Arnold Schwarzenegger) back through time to destroy his pregnant mother, Sarah (Linda Hamilton). This attempt was failed in the original Terminator movie. Now, a more advanced killing machine, the T-1000 (Robert Patrick), has been sent to complete the job. This Terminator has been sent back to 1994 to kill John Connor (Ed Furlong) as a child – only the future Connor is aware of this and has reprogrammed and re-sent Schwarzenegger’s T-800 cyborg to protect his younger self.

Terminator 2: Judgement Day opens with Connor in foster care, his mother having been sectioned for her insistence that the world is set to be destroyed in 1997 and her unwavering belief in killer robots. Her rebellious son is already showing signs of the programming expertise and rebellious nature which will make him such a fearsome leader: he’s riding motorbikes and stealing money from ATMs at the tender age of ten years old.

After linking up with Connor in a thrilling chase sequence, the T-800 takes him to the sanitarium where his mother is being held – and bust her out. They then seek out Miles Dyson (Joe Morton), designer of the prototype SkyNet system, in order to stop him from taking a course of action which will lead directly to nuclear carnage.

Terminator 2: Judgement Day has aged surprisingly will over the course of twenty years. At times it’s a little clunky and clumsy, the basic premise still works, the special effects have stood the test of time remarkably well and the characters are pretty well drawn. Linda Hamilton takes the action woman role so beloved of director James Cameron, transforming herself into a braless, muscular heroine much like Aliens’ Ripley. Ed Furlong’s career was always likely to fall away following this excellent debut here, and Joe Morton provides able support. The star turns, though, are the Terminators.

Robert Patrick is tremendous as the villainous T-1000. He’s a lean, sinewy actor with sharp, evil features – the absolute opposite of the overtly muscular Schwarzenegger – and his controlled physical presence lends the T-1000 an air of genuine power. The fact that he’s such an intimidating presence despite his relatively slender frame is testament to Patrick’s excellent performance – it’s a real surprise that he didn’t go on to bigger things.

The T-1000’s focus is contrasted against Schwarzenegger’s relative warmth. Although still a cyborg, the Connors alter his CPU settings to enable his capacity to learn emotion, aiding his ability to understand the world of humans and leading to some of Schwarzenegger’s most memorably quotable dialogue. He’s never really been much of an actor, but it doesn’t matter here, and the T-800 is a more likeable character thanks to Schwarzenegger’s shortcomings.

For many, the film’s stand-out moments will be the action sequences. The initial chase is still breathtakingly good after all this time, thanks largely to the complete absence of CGI. Whilst computers can create the impossible, they often lack weight and substance. Cameron uses no CGI here, instead opting for magnificent stunt driving and seamless editing as the Terminators and John Connor engage in a high-velocity three-way pursuit across the city.

The climactic battle scene is also one which lingers long in the memory. CGI is completely necessary here: the T-1000 is made from a mercury-like substance which allows him to shape-shift throughout the film, mimicking other people and inanimate objects. Although slightly dated, his morphs and transformations still convince, even if they will ultimately prove to be his downfall and the film’s strangely poignant denouement.

There’s more here than just action set-pieces, however. The movie raises and explores some interesting questions about the future of mankind, our relationship with technology and the role of family. Many of these are themes which Cameron has gone on to explore repeatedly – but never more successfully than in this, arguably his greatest directorial achievement.