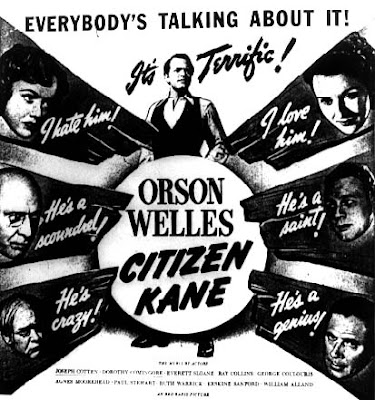 Here is what I knew of Citizen Kane before I watched it: there was once an episode of the Ghostbusters animated series based on the story; it is about the media; it was directed by and starred Orson Welles; it utilised innovative camera techniques (we studied some of these at university); it’s regularly voted the greatest film of all time; there is a Rosebud involved. And that’s it. For one reason or another, I’ve always avoided watching Citizen Kane or trying to find out any more about it – despite its cultural significance and the esteem in which it is held.

Charles Foster Kane (Welles) is a multi-millionaire media magnate whose seemingly inevitable rise to the American presidency was abruptly halted when news emerged of an extra-marital affair. In a fast-moving opening segment we are provided with a potted history of Kane’s career which places him alongside historical figures such as Churchill and Hitler (a sequence to which Forrest Gump is heavily indebted) and reveals the final enigmatic word he uttered on his deathbed: “Rosebud”. Intrigued by the mystery of his final word, the New York Inquirer launches an investigation to find out exactly who or what ‘Rosebud’ is. What follows is a series of extended flashbacks documenting Kane’s life through the eyes of those who knew him.

Welles is superb as Kane – aged only 25 at the time of filming, he could hardly have anticipated that he would never better this performance. Playing the tycoon at various stages of his life and as a mesmeric mixture of ruthless egomaniac and generous philanthropist, Welles gives us a truly rounded character and some truly memorable scenes.

His direction, too, is absolutely superb. It’s a beautifully crafted film, full of inventive camerawork and wonderful lighting. Employing hitherto unseen zoom focuses, shots which travel through the scenery and angles never seen before, Welles vision was astounding back in 1941 and still impresses over seventy years later. Sadly, the narrative hasn’t aged so well. At times, Citizen Kane is excessively wordy. Very few of the actors can hold a torch to the leading man and some are, quite frankly, more than a little irritating.

Welles never managed to recreate the success of his directorial debut, instead seeing his career slide into mediocrity which ended in him providing voiceovers for cartoons like Transformers the movie. Thankfully his legacy has endured thanks to a movie which, whilst dated, remains interesting, provocative and, above all, inspirational.