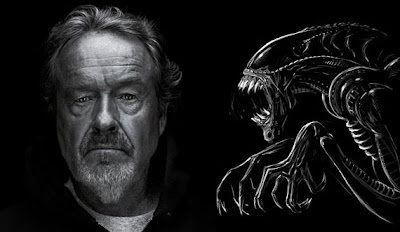 Made in 1979, Alien remains relevant, influential and highly regarded. And so, having seen the power and majesty of his original creation diluted in a slew of inferior sequels (Alien vs Predator? Really?), it’s little wonder that Ridley Scott has finally seen fit to revisit the world he originally created (alongside designer HR Giger) in order to give audiences a 21st century Alien film which capitalises on technological and cinematic advances to immerse the audience still further in his darkly futuristic universe. That film is the eagerly anticipated Prometheus.

Scott’s original movie tells the tale of the Nostromo, a mining ship carrying twenty million tons of iron ore back to Earth. The atmospheric opening scenes occur largely in silence as the crew are held in suspended animation for the journey. Eventually a yawning and bleary-eyed Kane (John Hurt) signals an awakening amongst the crew: they have been roused by the ship’s computer to answer a distress call.

Touching down on a seemingly deserted planet, the Nostromo’s crew discover a huge spacecraft and its long-dead pilot: an alien husk slumped in its seat. Exploring deeper, Kane stumbles upon a collection of pulsating eggs preserved by a strange gas. As one of the eggs cracks and splits open we are introduced to an alien life which hitches a ride back onto the Nostromo – where it then wreaks havoc.

Prometheus is partly a prequel and partly a fresh exploration of the Alien universe: scientists funded by a mysterious benefactor explore space in an attempt to explore the origin of humankind. It’s certainly not an original idea – nor a complicated one. To say more, however, would be to risk spoiling aspects of the plot – anathema to Alien enthusiasts.

Of course, thirty years on there are few aspects of the franchise which are unknown to audiences: duplicitous cyborgs, creatures bursting through prominent cast-members’ stomachs and seeing Sigourney Weaver in her knickers offer no surprise to audiences familiar with the source material or the various imitations which followed in its wake.

As such, it makes perfect sense for Ridley Scott to retain and modernise those elements in Prometheus. Rather than Weaver, the role of ass-kicking underwear-clad woman goes to Noomi Rapace (complete with unconvincing English accent), there’s a clever twist on the imploding stomach scene and, this time, the cyborg steals the show.

Other characters are less well drawn, occasionally bordering on caricature. This was not a problem in Alien, where only seven crew populated the Nostromo: each played a significant part in proceedings. Prometheus employs too many underdeveloped characters: as good as Charlize Theron looks in tight lycra, she serves only as eye candy and her role could have been trimmed from the film with no discernible impact on the narrative.

And what of the narrative? Whilst Alien was an (almost) entirely straightforward film, Prometheus attempts to be far more ambitious. Ideas of religion, creation and mortality are touched upon – but would have benefitted from deeper exploration. Although creation and religion are intrinsically linked, the film offers only a half-hearted exploration of the latter and, in its climactic scenes, an unsatisfactory account of the former.

Thankfully, where the narrative fails, the design triumphs. Perhaps Alien’s strongest asset is its style: despite being over thirty years old it has barely dated at all. Admittedly, there are one or two slightly limp moments, but by and large it’s a brilliantly conceived set of steaming, rusted space-junk and believably claustrophobic corridors. If anything, the film benefits from its absence of CGI: Scott’s use of real models and genuine sets adds a weight and heft which CGI often lacks.

Not here, though. Although the 3D adds absolutely nothing to Prometheus, the landscapes and backdrops are epic combinations of Icelandic vistas and computer-generated moonscapes, the spacecraft is convincing and, once again, Giger’s imprint looms large. Alien’s feeling of claustrophobia has disappeared into the wider, more open spaces of Prometheus, perhaps to deliberately mirror the larger themes Scott attempts to explore here.

Ridley Scott fought tooth and nail for the necessary budget to include his creature in Alien – and then used it sparingly, adhering strictly to the Jaws school of movie monsters: the less you see of it, the scarier it is. That’s not to say, however, that the beast is anything less than horrifying. A sickening juxtaposition of metallic and organic, the creature lurks half-lit in the shadows save for occasional lightning quick bursts of pointed teeth, dripping mucus and phallic symbolism.

That ‘less is more’ approach is, surprisingly, also evident in Prometheus. Despite a much larger budget and a more accomplished special effects department, Scott wisely restrains himself here. There are still grotesquely squeamish moments but they’re used intelligently to explore the themes which the Alien series has referred to throughout: body horror, penetration and forced impregnation.

Ridley Scott’s Alien set the bar for science-fiction films and spawned a series of follow-ups which diminished in quality. With Prometheus he’s posed a series of new questions which he can hopefully answer in the inevitable sequels which will follow. Only this time, let’s hope the series improves as it continues.