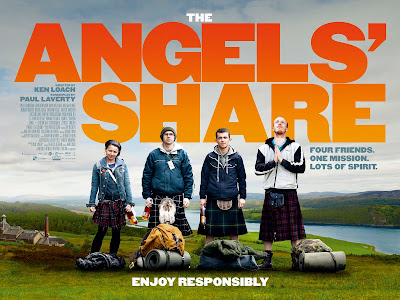 Whilst Ken Loach is famed for his gritty realism and social commentary, his later output has mellowed slightly. The whimsical Looking For Eric employed Monsieur Cantona as himself in a light-hearted comedy with a social conscience. His latest offering continues the theme. Although grounded in the social and economic deprivation of Glasgow, The Angel’s Share is refreshingly optimistic and uplifting: a genuine feelgood film.

The opening pulls together a disparate group of young offenders: following a fabulously funny opening scene featuring drunkenness, high-speed trains and voices from the heavens, Loach introduces us to a motley collection of petty criminals. They’re presented in extreme close-up as a judge intones their assorted crimes. Their smirking faces display the disregard that they, and Loach, hold the proceedings in.

The core of the film’s characters are drawn from this bunch. As is often the case in Loach’s movies, these actors are strictly non-professionals – many making their acting debuts. Chief among these is Robbie (Paul Brannigan), the only member of the group facing serious charges. Escaping from a serious GBH charge with 300 hours of community service, thanks largely to the imminent arrival of his unborn child, Robbie faces the very real possibility of losing everything in an ongoing family feud which he is unable to place in his past.

Luckily for Robbie, he falls under the supervision of Harry (the excellent John Henshaw), a working class Mancunian who forms a strong bond with his younger charge. He’s a wonderful salt-of-the-earth character with a heart of gold – and Robbie blossoms under his care. Toasting the birth of Robbie’s son, the younger man begins to discover a talent for whisky tasting which is developed under Harry’s gaze. And when a priceless barrel of Malt Mill becomes available for auction, Robbie sees an opportunity to break the vicious circle he’s trapped within.

What follows is a cleverly plotted, pacy crime caper with characters who are well-crafted, believable and likeable – a rarity in modern cinema. It’s impossible not to root for Robbie, thanks largely to Brannigan’s magnetic and magnificent performance. Charming yet vulnerable and aggressively handsome, he’s a wonderful screen presence who credits Loach with saving him from a life of crime. He’s already gone on to seduce Scarlett Johansson in the upcoming Under The Skin – it would be little surprise to see him achieve further success.

Brannigan’s is not the only creditable performance here, however. Every actor who appears before the camera is brilliant. Quite how Loach draws such performances from amateurs is unclear – but his skill cannot be denied. The dialogue seems largely improvised and it’s easy to assume that many of the characters are real lawyers, auctioneers and tour guides. But perhaps not. Either way, what appears is some of the most fantastic dialogue I’ve heard in a film in some time.

The Angels’ Share is a wonderful film which marries reality and redemption brilliantly: it warms the heart like a fine single malt.