THE IMDB TOP 50 CHALLENGE #31 It's A Wonderful Life 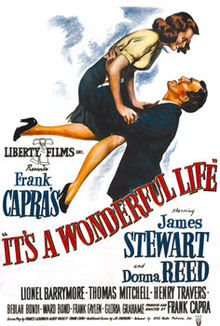 Once upon a time, Red Dwarf was the funniest television programme ever made. For those not familiar with it, it was a space sci-fi comedy set on a mining ship. The crew were a pedantic hologram, an anally retentive cyborg, a self-obsessed mutant cat and the last known human in the universe: Lister. Although Red Dwarf has dated terribly, one thing which still resonates is Lister’s dream for the future. As the last man standing, what he wanted was simple: to live with his loving family in Bedford Falls. And who wouldn’t want that? For Bedford Falls is the setting for It’s A Wonderful Life – the most life-affirming, warmly nostalgic film ever made.

George Bailey (the amazing James Stewart) is the unsung hero of Bedford Falls. His entire life has been spent putting others first: risking his life to save his brother’s and staying home to manage the Bailey Savings & Loan company following the death of his father. Having sacrificed his dreams to travel and study, he has sacrificed material wealth in favour of friends and family.

Tragically for George, local villain Potter (Lionel Barrymore) is intent on acquiring the Savings & Loan – the only institution in Bedford Falls he doesn’t own. George, of course, is loathe to concede his community-centred business – so Potter sets out to ruin it and force George to give it up. On Christmas Eve, facing ruin and having let down so many people, George is left broken and desperate.

Contemplating suicide on a bridge, he is visited by his loveable guardian angel: the bumbling Clarence (Henry Travers). Clarence shows George how his community would have suffered if he had never been born: a nightmarish alternate reality in which his family have suffered bereavements and insanity and his beloved wife Mary (Donna Reed) is a lonely, childless spinster. There are obvious parallels to be drawn with Charles Dickens’ A Christmas Carol as supernatural beings visit the living to convince them of the value of life – and the comparisons are entirely fair and justified.

Like A Christmas Carol, It’s A Wonderful Life has a darkness at its heart which provides a key contrast with the lighter, warmer denouement. George’s descent into despair is brilliantly played by Stewart, casting aside the wholesome image he had previously fostered, before returning again t the amiable and warm persona he had previously enjoyed. Always a witty and affable screen presence, It’s A Wonderful Life is perhaps the greatest demonstration of Stewart’s range and skill.

For some, It’s A Wonderful Life is too saccharine sweet. Presumably those people have had their hearts removed and replaced with swinging bricks. It’s a joyful celebration of family, community and the individual, providing proof that no matter how insignificant you believe yourself, you mean something to somebody. George’s plight and his redemption prove that humanity and goodness are what really matters – a message which society needs reminding of at Christmas time more than ever. It’s a wonderful film.