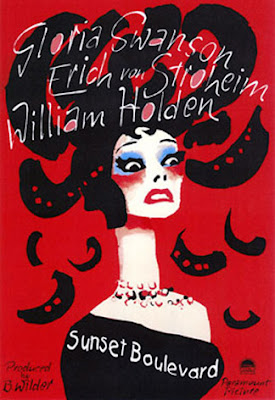 For reasons unknown, I’d always assumed that Sunset Boulevard was a musical. And for that reason alone, I’d avoided it like the plague. Musicals are anathema to me. The worst form of cinema and, perhaps, the worst art form of all. I despise them with every ounce of my being. So, after labouring under my massive misapprehension for so long, I was delighted to find that Sunset Boulevard is, in fact, a cynical, Noirish look at 1950s Hollywood.

The film opens with the corpse of narrator Joe Gillis (William Holden) face down in a swimming pool. He’s a down-at-heel screenwriter with debts to pay and bailiffs on his tail. When they attempt to repossess his car, Gillis suffers a blowout and pulls into what he thinks is a deserted house on Sunset Boulevard – only to find Norma Desmond (the wonderful Gloria Swanson) living there. She’s an aging silent movie star grieving over the death of her pet monkey. Initially mistaken for a mortician, Joe somehow ends up reading Norma’s appalling script ‘Salome’.

Soon, Joe is installed as Norma’s new pet monkey: she employs him to rewrite her script so it’s fit for her screen return – and worthy of the legendary Cecil B De Mille’s direction. She pays off Joe’s debts, houses him and furnishes him with fancy clothes – but he knows that she is deluding herself with dreams of a triumphant comeback. Worse still, she’s fooling herself into believing that a romantic relationship with Joe could ever work – especially after he takes a shine to a beautiful young scriptwriter, Betty Schaefer (Nancy Olson). But as we know, breaking free from Norma’s clutches will prove impossible – he’ll end up dead in her pool. But how?

It’s an absolute belter of a film, filled to the brim with fabulous performances, wonderful cinematography and whip-smart dialogue. Key to it all are the two central performances. Holden is the heart of the film – a conflicted, ambitious young man with obvious flaws and good intentions. Holden’s wry humour adds depth to a character who might otherwise have been eviscerated by the strength of Swanson’s character.

Genuinely a former silent cinema star, she is mesmeric as Norma. Her staccato delivery, supercilious manner and enormous ego are tempered magnificently by her sad vulnerability. She’s quite clearly deluded and possibly mad, but it’s impossible not to sympathise with her. Whether it’s possible to actually like her is an entirely different matter.

Billy Wilder’s skill here is in creating a world in which characters are defined as much by their faults as their qualities. Nobody in Sunset Boulevard is entirely innocent, but the cynical writing and direction expose them for what they are, and at the same time lances the Hollywood myth, revealing the cruelty at its heart and demonstrating how readily talent can be chewed up and spat out.

Sunset Boulevard almost an oxymoron: a cynical movie full of heart. And it’s not to be missed.