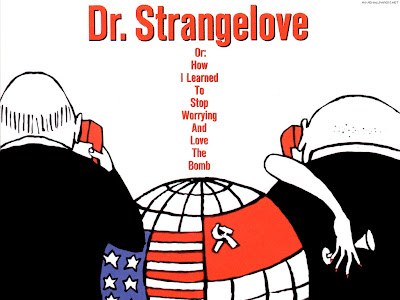 Stanley Kubrick made The Shining, Full Metal Jacket and A Clockwork Orange. For this perfect hat-trick of films, i’m quite prepared to forgive him the shit-on-a-stick which was Eyes Wide Shut. But as much as i worship the man, there’s one of his films which i just don’t get.

Dr Strangelove (Or How I Learned To Stop Worrying And Love The Bomb) is a film beloved by critics and the central performance of Peter Sellers lauded as one of the finest ever. But i don’t quite see the appeal.

Perhaps i’m just too young. The Cold War was not a hugely significant presence in my life, and as a result the tensions and hostilities between the US and Russia had little impact on me. Dr Strangelove’s central conceit plays heavily on the absurd enmity between the superpowers, and fails to resonate with me entirely.

The storyline concerns a ridiculous turn of events which see the US military poised to bomb Russia to kingdom come with a series of 40 megaton nuclear missiles. This inevitable bombardment is the direct result of a rogue commander’s order and a series of illogical fail-safes which make calling off the mission impossible.

On the other side of the Iron Curtain, the Russians have built a ‘doomsday machine’ which will automatically detonate in the event of an attack on the Soviet Union. Unfortunately, the US were unaware of this, meaning that once their bomb drops, the Soviets will launch a counter-strike which, combine with the American bombs, will destroy every living thing on the planet.

For me, Dr Strangelove has dated far more than Kubrick’s other output. The satiric edge has been blunted by time, with many of the jokes falling flat. At the time, i’m sure the movie was fresh, immediate and savagely political. Now, the deadpan delivery and names-as-puns seem tame and slightly old-fashioned.

Peter Sellers gives three excellent performances in his triple role as effete US President Merkin Muffley, RAF Captain Lionel Mandrake and the eponymous Strangelove, but for a younger audience (and i’m not that young) Dr Strangelove lacks the required laughs.