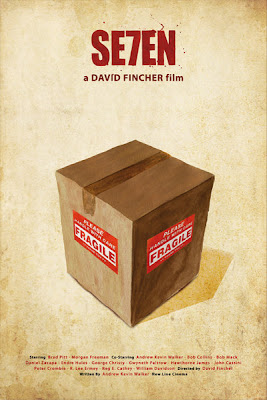 Serial killers and violent slashers have been a staple of Hollywood for so long that they’ve become hackneyed, clichéd and, quite frankly, dull. There are only so many times an audience can watch the same plot rehashed, the same killers recycled and the same deaths re-enacted. Praise the lord, then, for Se7en – without question the greatest serial killer movie of all time.
In one key way, Se7en subverts our expectations of the genre: we are given no clue about the killer’s identity. The audience is never asked or expected to identify him and are never given a glimpse of him at work. Instead, we are provided with another mystery to solve: how will he kill next?
Selecting his victims so that he might punish them for committing the seven deadly sins (gluttony, sloth, pride, envy, lust, greed and wrath), the killer constructs elaborate crime scenes and creative deaths: gluttony sees a fat man chained to a table and forced to eat pasta sauce until his stomach ruptures, sloth involves the near mummification of a victim tied to his bed for a year and kept barely alive.
The killer (unimaginatively christened John Doe) is methodical, intelligent and patient – everything that happens in Se7en is part of a masterplan which culminates in one of the most brilliantly plotted twists ever. Anyone who second-guessed the film’s ending is a liar or a genius. Or a sociopathic murderer.
Hints at Doe’s state of mind are provided in the finest title sequence I’ve ever seen. Featuring the construction of his notebooks, Fincher had a team working tirelessly to produce genuine artefacts of hand-written scrawls, psychotic outpourings and horrifying images of torture and disfigurement. This filmed process is truly horrifying.
Although John Doe’s murders belong strictly in the present day, everything else about Se7en is decidedly old-fashioned. The central relationship between Brad Pitt’s impetuous young cop, Mills, and Morgan Freeman’s weary Somerset has been seen a thousand times. But their dynamic is crucial: Mill’s hot-headedness is just as important as Somerset’s intelligent understanding of Doe’s literary references to the likes of Milton, Chaucer and the Bible.
The set design and costume also belong to a bygone era. Cops wear trenchcoats and carry flashlights, phones are attached to walls, furniture is heavy and wooden, the rain never stops pouring. When light, colour and modernity impinge on proceedings it’s usually to illustrate the gaudy nature of Doe’s killings and the perceived sins of his victims.
To say much more would be to destroy Se7en’s power. There are too many surprises which could be spoilt, too many creative touches which could be ruined. Be warned that Se7en is not a film for the faint hearted and occasionally requires a strong stomach. But the gruesome nature of its crime scenes is not exploitative or gratuitous. Rather, they are an insight into a twisted and warped mindset and a crucial part of drawing the audience into a highly original and intelligent horror movie which remains unrivalled sixteen years after its original release.
Posted by The Author at 22:42