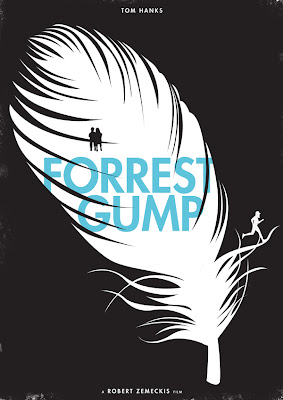 Regular readers of this blog will be aware of my long-standing hatred of Tom Hanks. I hate his weaselly voice, his plasticine features and his piggy little eyes. I believe him to be a hugely limited actor and i’m astounded by the regard in which he’s held by audiences. And so it will be a surprise to many that, despite Hanks being on screen for almost every minute of the film’s running time, Forrest Gump is a film I have huge affection for.

For anyone unfamiliar with the story, Forrest Gump (Hanks) is a simple-minded soul with an IQ of 75. Growing up in Greenbow, Alabama, he’s cared for by his loving mother (Sally Field) and best friend Jenny (played as a grown-up by the lovely Robin Wright). Forrest singularly fails to understand the world around him, but engages with it sweetly and naively, his sense of innocence and wonder never diluted by age or experience. As he grows up, Forrest’s unique perspective opens up countless unlikely opportunities and he becomes a war hero, football star, self-help guru and businessman – but always returns to the love of his life: Jenny.

Perhaps Forrest Gump’s main asset is its relentlessly optimistic outlook. Funnelled through Forrest’s eyes, the world is a less cynical, warmer place. He sees the good in everyone – a characteristic which endears him to all, allows people to take advantage of him and drives the narrative by placing him at the centre of some of history’s biggest scandals. That’s not to say that Zemeckis’ movie is saccharine sweet: at times Forrest’s naive world view is the perfect vehicle for politicking – his view that the Vietnam War consisted largely of taking long walks and ‘looking for this guy named Charlie’ is endearingly idiotic but cuts to the heart of that most futile of conflicts.

Although it pains me to say it, Hanks is magnificent as Gump. He needs to be, as without his easy charm the film might easily fall down structurally. His story is told episodically as he sits on a park bench talking to the various people who take a seat next to him. His storytelling links each of the episodes effectively, with his captive audience mirroring the audience at home and allowing him to add context and embellishment to his remarkable tales. These tales may or may not be true. Director Robert Zemeckis wisely leaves the audience to decide how much truth or self deception there is within Forrest’s version of events but his lack of ego suggests that he really did do the things he claims – including teaching Elvis to dance and exposing Watergate.

Genuine footage of people like Richard Nixon, John Lennon and JFK is cut with newly minted film of Hanks and co, creating a montage of old and new which, whilst slightly unconvincing now, was at the cutting edge of special effects and editing on the film’s release in 1994. I remember seeing an interview in which Zemeckis talked about the budget of the film and revealed that it had cost a fortune – other than Gary Sinise losing his legs midway through, I’d hardly noticed any CGI or special effects at all, so consumed was I by the world he had created.

Impressively, despite Hank’s massive performance and the roll-call of famous figures on display, the show is almost stolen by two actors in supporting roles. Mykelti Williams is memorably charismatic as the displaced shrimp fisherman, Bubba. Serving in Nam with Forrest, his speech on the many ways you can cook the aquatic crustaceans is perhaps the most memorable dialogue in a film stuffed to the gills with recognisable lines and soundbites.

But Gary Sinise is even better as their commander, Lieutenant Dan. He’s a bug eyed, reptilian little man, but he’s a powerful actor whose jaded and embittered character is probably the most realistic in the film – and all the more likeable for providing such contrast to Forrest’s guileless persona. They’re a superb screen couple.

Forrest Gump is certainly not flawless. It’s overly long and would benefit from a prune – particularly around its baggy middle. But it’s a long time since Hollywood managed to make a warm hearted family film which stands the test of time and is almost universally loved. For now, it seems, family films have become either animations, Pirates of the Caribbean sequels or superhero flicks. It’s a shame, because when they’re made like this, they linger long in the memory.