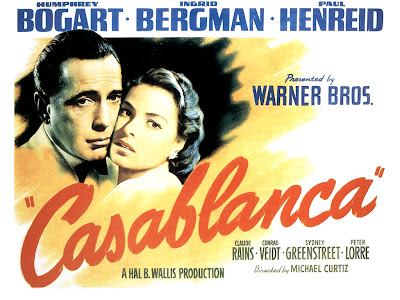 The last time I watched Casablanca was around ten years ago. In order to escape the Christmas Day hustle and bustle of my parents’ house, I escaped upstairs, laid on their bed and watched it on TV whilst cracking pieces of a block of toffee with a little metal hammer and greedily stuffing them into my face. Because of the time of year I last watched it, the food related memories associated with it and because of its famously familiar (and often misquoted) dialogue, I found seeing it again a richly evocative experience.

With World War II raging, the Moroccan city of Casablanca has become a bustling port city teeming with criminals and fugitives desperate to escape to America via Lisbon. To do so requires a letter of transit – a commodity which is bought, sold and traded illegally in Rick Blaine’s (Humphrey Bogart) Cafe Americain.

Rick is a neutral, simultaneously turning a profit and a blind eye, refusing to put his ‘neck on the line’. But when Victor Laszlo (Paul Henreid), a resistance leader escaped from Nazi Germany, shows up with the beautiful Ilsa (Ingrid Bergman), Rick is forced to take sides. For Ilsa is his true love – and Rick believes she jilted him for Laszlo. When he’s put on the spot, can Rick find it in his heart to help her and Laszlo escape together?

The laconic Bogart is perfectly cast as Rick. He exudes charm and cynicism is equal measure – but there’s clearly more to him than meets the eye. His sentimental streak is well concealed, but as the narrative progresses we come to realise he’s a man with a big heart and a charitable nature: his staff are assembled from refugees of Nazi Germany, he bends the rules for others’ sake and is totally loyal to those he cares about.

Despite his excellent performance, Bogart is not the best actor on display here. Claude Rains steals every scene he appears in as corrupt police commissioner Captain Renault, perfectly balancing delicious relish in his misdeeds with pedantic officiousness. Indeed, all of the ensemble cast give excellent accounts of themselves – with the possible exception of the slightly wooden Bergman. Still, her luminous presence almost makes up for her acting deficiencies.

The soundtrack too, is wonderful – with the piano refrain of As Time Goes By recurring throughout the movie. And although nobody ever really says ‘play it again, Sam’, the film is stuffed with memorable dialogue which has become arguably the most quoted in cinema history - and has become part of the everyday vernacular.

Although any film which has seen its seventieth birthday will have inevitably dated, Casablanca remains fresh to this day thanks to its universal themes, its morally dubious characterfs and the plots clever twists and turns. It’s a wonderful, wonderful movie which I hope to still be watching when i’m well into my eight decade.