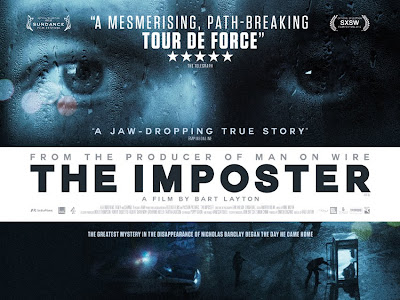 The rise of the documentary continues apace, with increasing numbers of factual films securing cinema releases. Outstanding distribution companies like Dogwoof continue to promote excellent films from across the world, British successes like Senna have drawn huge audiences and now, with a truly remarkable piece of work, Bart Layton has presented audiences with a story which truly is stranger than fiction. This true tale of deceit, mistaken identity and trickery could never have been made as traditional narrative cinema for one simple reason: the story is too far-fetched for an audience to buy it.

In 1994, a blue-eyed, blonde-haired boy of thirteen disappeared from San Antonio, Texas. He was Nicholas Barclay, who vanished without a trace on his way home from basketball practice. Astonishingly, more than three years later Spanish police in the small town of Linares reported that he had shown up there after a harrowing ordeal involving child abuse and paedophilia.

The sixteen year old child who returned from Spain was quite transformed from the one who had disappeared. But despite his dark hair, brown eyes and thick French accent, the Barclay family identified him as their own and took him into their home. Eventually, after five months, the mask slipped and ‘Nicholas’ was revealed to be an imposter: a 23 year old French Algerian who had spent his adolescence impersonating abandoned teenagers in order to milk the kindness of strangers – and the benefits system.

The imposter is the charismatic Frederick Bourdin – a man desperately in need of an identity who takes advantage of a series of extraordinary coincidences to dupe his way into the United States. But how could anyone fall for such a story? The simple answer is... they didn’t. Eventually Bourdin’s story begins to collapse under its own weight as he adds layer upon layer of deceit to his already tall tale. Soon he’s being investigated by the FBI – and a dogged Private Investigator named Charlie Parker.

But whilst Bourdin’s motives are understandable, others are more difficult to read. Did the Barclay family really believe that he was there son? Or are they playing an active role in their own deception? The film’s second act is devoted to uncovering the truths behind the lies – and Bourdin plays only a minimal role.

The Imposter can rely on an intriguing and shocking narrative to hold the audience’s attention, but it’s also a brilliantly crafted film. The widescreen vistas of arid Texan landscapes are beautifully shot and the documentary is skilfully edited: match-on-action and reaction shots of Bourdin add startling weight and emotional heft to proceedings. Director Bart Layton could easily have rested on his laurels here, trusting his story to be the star. Instead, he has created a dense and rich documentary and character study which will leave audiences puzzling long after the credits have rolled...