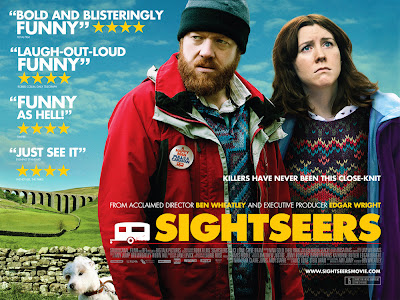 Ben Wheatley’s last film Kill List was a thoroughly disconcerting chiller with a dark, dark heart. He treads a little more lightly here, although there is a black streak running through this tale of an odd-couple caravanning and killing their way across northern England.

Tina and Chris (played by co-writers Alice Lowe and Steve Oram) are a pair of lonely nerds who have found solace in one another’s company. She lives at home with her unstable mother and the memory of her dead dog, he is a scruffily bearded anorak in a beige fleece, desperate to show his new girlfriend the glorious sights of Mother Shipton’s Cave and the Pencil Museum.

He’s not all he initially seems, however. An early encounter with a litter-lout reveals a seething resentment and a vicious self-righteousness which instigates a brutal murder-spree as he gradually insinuates Alice into his murderous rampage. They might be clad in homemade underwear and woollen bobble-hats, but the Midlands’ version of Bonny and Clyde are not to be crossed.

Of course, this all sounds a little bleak. But it’s not. Sightseers is a hilariously funny film which combines high-farce with jet-black humour to wicked effect. The murders are grotesque and gruesome, but never incongruous given the matter-of-fact way in which Tina and Chris deal with them – when Tina confesses that she’d never have considered killing innocent people, Chris crisply replies, “He’s not a person. He’s a Daily Mail reader.”