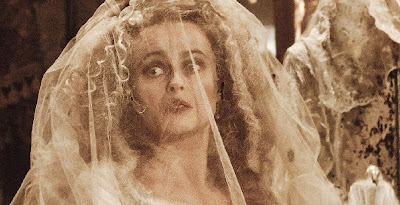 Last Christmas, the BBC screened their wonderful adaptation of Charles Dickens’ magnificent Great Expectations. It was a sumptuous and faithful version of the source material, beautifully photographed and very well acted. Now, less than a year later, the Beeb have funded another version – and one has to wonder why?

Admittedly, this Great Expectations has pedigree: a script by David Nicholls, Mike Newell in the director’s chair and a stellar cast of British thespians including Ralph Fiennes, Helena Bonham Carter and Robbie Coltrane. Why, then, is it such a stinker?

For the uninitiated, Great Expectations is the story of young Pip Pirrup (Jeremy Irvine), an orphan of humble origins who helps out an escaped convict by providing him with food and kindness – and a file with which to escape his shackles. Later, Pip becomes the playmate of young Estella (Holliday Grainger), daughter of wealthy local eccentric Miss Havisham (Helena Bonham Carter) – a woman still wearing her bridal dress years after being jilted on her wedding day.

In his teenage years, Pip becomes the recipient of a large income – contingent on his promise never to investigate who his mysterious benefactor is. Of course, he instantly assumes it’s Miss Havisham who’s funding his new lavish London lifestyle – and that his gentrification will ultimately lead to a marriage with Estella. But things are rarely so simple.

The problems with this adaptation are numerous, but chief among them is the lack of originality. It adds absolutely nothing to the canon of screen versions. Rather, it steals wholesale from those that preceded it, creating a pick and mix approach which rarely hangs together convincingly. Of course, this could be interpreted as faithfulness to the novel, but scenes such as Pip and Herbert’s fist-fight are so clearly lifted from David Lean’s film that it’s a little embarrassing.

The casting raises questions too. Jeremy Irvine is terribly wooden in the lead role, Holliday Grainger never quite convinces as the acerbic Estella and David Walliams is intensely irritating as Pumblechook. Predictably, Helena Bonham Carter is a fine Miss Havisham, but it’s such an obvious and lazy choice. Only Jason Flemyng  and Ewen Bremner really inhabit their roles – and sadly they’re not on screen enough.

Some of the design decisions are strange to say the least. While period London looks great, some of the costumes are frankly bizarre. The obnoxious city gents with which Pip fraternises look like they’ve stepped off the set of an Adam Ant video and most of Estella’s dresses are simply horrible.

Miss Havisham looks the part: a greying, decaying pile of hair and rags. The costume provides a couple of chilling moments as she invites characters under her veil to whisper conspiratorially with her, but this is undermined by a distractingly prominent cleavage and some strange shadows which fall across her face.

The biggest gripe with the film, however, is in the narrative. Written in serial, critics of Dickens’ work have often pointed to an unlikely set of coincidences and plot contrivances that pile up in the final act. Here, that feeling is multiplied exponentially. There are few clues given as to what’s really going on, meaning that when the final series of revelations arrive they feel hurried and ill-considered. An audience unfamiliar with Great Expectations would almost certainly feel short-changed.

It’s hard to avoid the feeling that there are scenes of exposition sitting on a cutting room floor somewhere – snipped out to trim the running time to a manageable 128 minutes. Mike Newell would have been better served adding that material back into the film, allowing himself three hours to tell the story and restoring lost characters and scenes. But then he’d have made the three-hour serialisation the BBC made last year. And what would be the point of that?
Posted by The Author at 13:06